****UPDATE 7/10/09 – It looks as though the paperback edition of Cop Without A Badge has been delayed. The new date listed on amazon is August 4th and the new price is $15. The price has fluctuated quite a bit since I first saw it and that may be why amazon has created an entirely new listing for the paperback. (This is completely speculation on my part, but this would seem to be a way amazon could keep from honoring pre-orders for the original price of just under $13) Anyway, HERE

is the link to the most current updated listing on amazon. 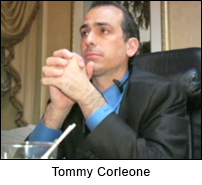 Tommy Manzo refused to grace Bravo’s cameras with his charming and gentlemanly presence throughout the entire taping of Real House Wives of Mobsters New Jersey, but it turns out he has been a T.V. star before! A couple of years ago Dina and Tommy were on VH1’s My Big Fat Fabulous Wedding and let the cameras follow them around while they planned their extravagant nuptials. According to VH1’s estimate the affair ended up costing over $1 million due to a laundry list of reckless expenditures including Dina’s “biggest cake anyone has every seen,” “obscene” amounts of flowers and $500 bedazzled butterfly thingies. Doubling the cost of the wedding was Tommy’s inability to stop inviting additional guests (as referenced in the reunion special). The only thing remotely sensible about the spending was that it was great advertisement for Tommy and his borther Albie’s event and catering business as well as The Brownstone, an event facility also owned by the Manzo brothers and the location of the wedding reception. 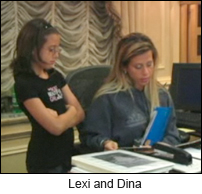 The footage below adds quite a bit of insight into Dina’s life, which was really quite mysterious on Real Housewives. For one, we get to see the dashing man who bought Dina, I mean married Dina. He may be hawt, but that’s just the beginning of his charm. This guy really knows how to treat a lady. He barely sees her, orders her around like a puppy, and whips out his checkbook to shut her up. Not only that, but he cheated on her for extended periods of time while they were dating. Currently rumors are circulating (possibly started by Danielle) that he is cheating on her now and has moved into an apartment across from the Brownstone to be with his latest purchase, I mean girlfriend.

Below is the complete episode broken up into three parts. You’ll see appearances by a younger Lexi, a thinner Caroline, and a brief look at Dina and Caroline’s other sister, Cookie. “Bubbies” also makes it’s debut. This was back when “Bubbies” was young and innocent and nobody knew it would be the breakout star of the decade. “Bubbies” rise to fame can be likened to the fabulous and heart-wrenching story of Britney Spears, and it’s only a matter of time before it goes nuts on the streets of L.A. It may already be in it’s “Toxic” phase, so rehab may be in “Bubbies” near future.

After the episode is Dina and Tommy’s audition tape where they talk about the first time they went out and how Tommy asked Dina to marry him soon after they both got back from dates with other people. This line from Dina seems to sum up Tommy’s level of commitment to the relationship: “When we break up he’s out in a Ferrari with his friends, and I’m throwing up in a fetal position.” Awwwwwww.

View the other parts of this episode on PAGE TWO