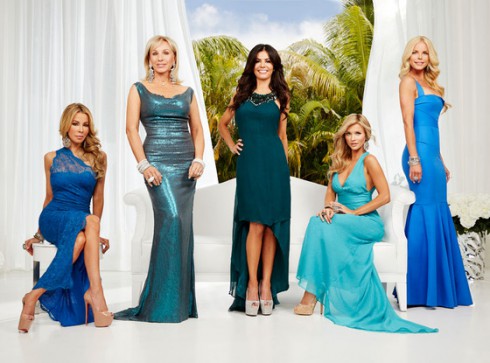 The Real Housewives of Miami is returning to Bravo in less than two months and along with a couple of casting changes comes two weddings, an arrest and a wild bachelorette party. The new season is jam-packed with drama and is sure to be the most memorable yet.

Returning from season 2 are housewives Lisa Hochstein, Lea Black, Adriana de Moura, and Joanna Krupa. Season 1 housewife Alexia Echevarria is also an official housewife this year. Last year during filming, Alexia had been dealing with her son’s horrific car accident and chose to step back and focus on him. Marysol Patton and Ana Quincoces will be featured in season 3 but in lesser roles, Marysol to focus on her ailing mother and Ana for unknown reasons.

In the third season, both Adriana de Moura and Joanna Krupa are planning to marry their significant others, Frederic Marq and Romain Zago. Fans will watch as the two battle it out to make their wedding the most memorable of all. First, fans will see Adriana walk down the aisle. Then, it will be Joanna’s turn.

The fallout from Alexia’s son Frankie’s arrest will also be shown on the show. Fans may recall hearing that he was arrested after punching a bum in the private parts and then posting the video on Facebook.

As for Karent Sierra, who was added to the cast last year as an official housewife, she has reportedly quit (it has also been reported that she was fired), opting to instead focus on other projects. However, she has been hanging with the ladies quite a lot throughout filming so a guest appearance from Karent is definitely a possibility.

The Real Housewives of Miami season 3 premieres on August 12 at 9/8c.

PHOTOS Meet Alexia Echevarria of The Real Housewives of Miami

‘Real Housewives of Miami’ Season 2 has eight women! Find out the scoop!