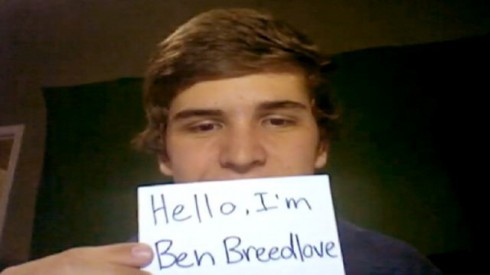 Videos 18-year-old Ben Breedlove posted YouTube videos a week before his death on Christmas day from a heart attack brought about by a lifelong heart condition has received national attention. They are “secrets”-type videos, a style of storytelling popular among teens using note cards to sometimes heartbreaking stories with messages of inspiration and strength. Click here to see another moving video by a teen who found her mother after she had committed suicide.

His funeral was attended by 1500 people, and 3 million people have viewed his YouTube videos.

In Ben’s video, he shared three separate near-death experiences he’d had as a result of his heart condition (Hypertrophic Cardiomyopathy.) The first occurred when he experienced a seizure at only four years old. That first time he saw a bright light that no one else could see and felt a peacefulness that he said he would never forget: “I cannot even begin to describe the peace, how peaceful it was. I will NEVER forget that feeling or that day.

He had a pacemaker installed May 3, 2009, but almost died for a second time when he went into cardiac arrest during tonsil surgery in the summer of 2011. He was able to be brought by EMTS, and wrote that he was “scared to die, but so glad that I didn’t.”

Then December 6, 2011, two weeks before he posted these videos, he cheated death a third time. He passed out at school, and awoke to find EMS trying to revive him. His heart stopped beating, but he could still hear them saying that he had no pulse. The brain continues working for a few minutes after the heart stops, so he was able to process this information, and think to himself “This is it, I’m dying.”

Then he suddenly had a vision and a feeling much like what he experienced when he was four. He was in a white room wearing a nice with his favorite rapper Kid Cudi.

“I then looked at myself in the mirror, I was proud of MYSELF, of my entire life, everything I have done. It was the BEST feeling.” He thought of a Cudi lyric from “Mr Rager” off of 2010’s Man in the Moon II: The Legend of Mr. Rager: “When will the fantasy end, when will the heaven begin?”

Then Cudi looked down at him from a glass desk, and said ‘ Go now.’ Breedlove said he “didn’t want to leave that place, and wished I had NEVER woken up.”

Kid Cudi was extremely touched by Breedlove’s near-death experience, and wrote on his Tumblr blog Cud Life: “This has really touched my heart in a way I can’t describe, this is why I do what I do. Why I write my life, and why I love you all so much. We love you Ben. Forever. Thank you for loving me. To Ben’s family, you raised a real hero, he’s definitely mine. You have my love.”

A memorial video for Ben:

Thank you Ben Breedlove for reminding us how short life is, and for letting us know that death can be a very peaceful process.