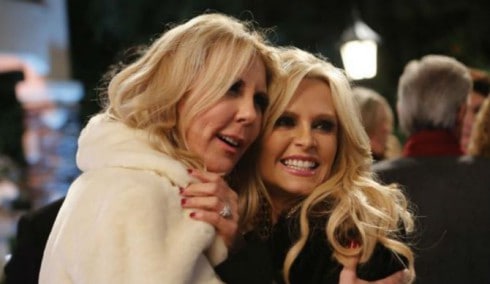 Tamra Judge and Vicki Gunvlason had a scare over the weekend when the Polaris RZR they were riding in lost control. According to TMZ, the vehicle flipped several times while the ladies were enjoying the sand dunes in Glamis, California on Saturday. Tamra was behind the wheel, and two other people were also involved.

After the crash, Vicki was airlifted to the hospital where she remained until her release early Sunday morning. Tamra was also taken to the hospital but was released later that day. The report states that the ladies were taken in as a precautionary measure and neither were in serious condition.

Tamra came forward to confirm the report as well as take full responsibility for the accident and thank fans for their support:

“So many text , tweets and phone calls asking if this is true. I can confirm it is. Thank you for your prayers and concerns. We are both beat up but very lucky to be alive. I’ve never been so scared in my life. As the driver I have an overwhelming amount of guilt and just happy that the 4 of us are alive.”

Thankfully, Tamra seems to be doing okay. She posted a picture of her broken helmet to Facebook:

It's not a good Glamis trip until you break in your new. helmet. I've never been so scared in my life 󾌳

She later posted a few shots on Instagram. It appears the O.C. gang were in the sand dunes celebrating Eddie’s birthday. Ryan and Ava joined in on the fun.

Camera crews were present as shooting is underway for the 11th season of The Real Housewives of Orange County.

We’re glad everyone is a-okay!