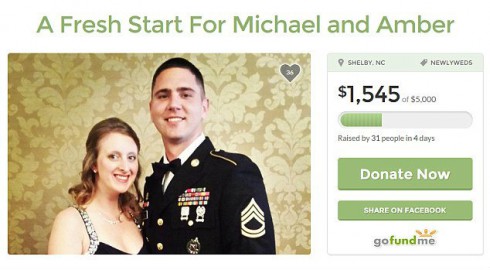 Amber Roof was due to marry fiancé Michael Tyo just days after her brother, Dylann Roof, allegedly murdered nine people at the Emanuel AME Church in Charleston, South Carolina. In a GoFundMe page created this week, she asked for donations to cover a new wedding and her dream honeymoon — which did not go over well with many people.

Our wedding day was suppose to be the most important and special day of our lives. It was suppose to start our lives together with our new family. Our day was the exact opposite. Our wedding day was full of sorrow, pain, and shame, tainted by the actions of one man. The Charleston Massacre took place and our lives were forever changed. The media abused our privacy and published all of our wedding information and destroyed our dream day. Destroying the first day of Michael and my life together.

Amber — who reportedly identified her brother to police — said she and her fiancé cancelled the originally scheduled wedding “to protect our family and mourn the lives of those lost,” but would now like to “start our lives on a postive note.” She said her requested $5,000 donation would go toward lost wedding costs, bills and her dream honeymoon. She also pledged to give 10 percent of all money raised to the Emanuel African Methodist Episcopal Church.

She raised $1,600 before taking the page down today–presumably because of the negative reactions of many people.

“Look I’m sorry your brother screwed up your wedding plans, however I’m way more concerned about the people who lost there loved ones,” one commented, before the page was taken down.

Another said, “What a bummer that your wedding got cancelled because a bunch of people were murdered by your brother. Have some respect and some patience. Go to the courthouse get married and save for another reception.”

Amber’s brother remains in police custody. The last of the nine shooting victims was laid to rest this week.