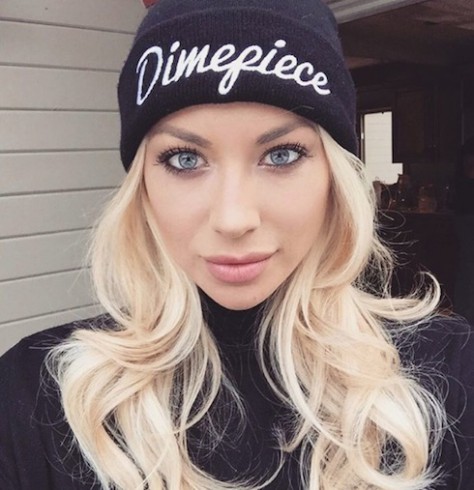 Fans are getting all worked up for the big Stassi Schroeder Vanderpump Rules return episode–which is entitled, appropriately enough, “The B*tch Is Back.” Stassi makes her long-awaited (and somewhat controversial) return to the Vanderpump Rules sets with tonight’s episode, and the 27-year-old has been amping up her social media game in preparation.

The Stassi Schroeder Vanderpump Rules comeback has been in the works for several months, and fans of the show are wondering exactly how much Stassi to expect. One thing we do know is that most of the rest of the cast–with one noteable exception–has been lukewarm at best regarding the return, and downright nasty at worst. Lisa Vanderpump herself was probably the most measured of the show’s cast, stating flatly that she wouldn’t let Stassi back on the show, even for one episode, without first getting an apology for the huge fights that marred Vanderpump Rules Season Three. “Humility is an important factor [in] being successful,” she said recently.

As for Stassi herself? She might not have learned that particular lesson…

Answer: Vanderpump Rules. Hold on to your wine glasses. I’m back, bitches.

The would-be starlet herself recently dished on the overall Stassi Schroeder Vanderpump Rules return engagement, and addressed how difficult it was for her to come back–but why she felt it was necessary. In part, she came back to deal with “unresolved drama,” according to a Fashion & Style interview: “I came back to the show for a specific person or couple of people that I felt like I didn’t handle the friendship like I should have, and maybe I cut things off way too quickly,” she said. Stassi made sure to add “I kind of resolved that I’m coming back[;] they’re not going to like it. It wasn’t the most fun….I built this show, so I have to come and stir sh*t up.”

And, in another recent interview–this one with Hollywood Today Live, Stassi admitted that hers is a “love / hate” relationship with Vanderpump Rules–but she wouldn’t have it any other way. “Things would have still gone down,” had she not left the show, said Stassi, “but would I have known about it?…It’s like one big chess game, and you always have to be like one step ahead.”

Speaking of which, a new report from Inquisitr confirms that Stassi and old Vanderpump co-worker Katie Maloney are finding their friendship again; the two were spotted together on the slopes of Park City UT this past weekend, and even posed for a few pictures with Kristen Doute. (Stassi appears to be in the center of the shots.)

At the same time, her budding re-friendship with Katie hasn’t kept Stassi from making a few catty tweets regarding tonight’s Vanderpump installment:

This is sure to be a cast of thousands. https://t.co/qEoGwQbO83 — Stassi Schroeder (@stassischroeder) January 18, 2016

We’ve got just a few hours more before the big reveal: Vanderpump Rules airs tonight at 9 PM EST on Bravo.

Naked Cowboy sues Naked Cowgirl, is there a Naked Court?