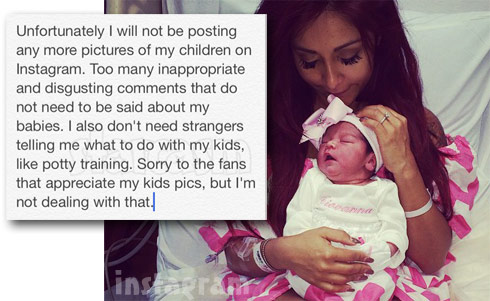 Chalk one up for the haters 🙁 Jersey Shore alum Nicole “Snooki” LaValle announced Tuesday that she would no longer be posting photos of her children on Instagram in part because of “too many inappropriate and disgusting comments that do not need to be said about my babies.”

Snooki, who is one of the most open celebrities on the planet when it comes to sharing her life with fans on social media, shared the disheartening message on Facebook, Instagram and her blog with a text graphic that read in full:

Unfortunately I will not be posting any more pictures of my children on Instagram. Too may inappropriate and disgusting comments that do not need to be said about my babies. I also don’t need strangers telling me what to do with my kids, like potty training. Sorry to the fans that appreciate my kids pics, but I’m not dealing with that.

This is a depressing development, but I read through celebrity social media accounts every day for a living, and I’m sad to say I think we are going to see more and more celebrities taking a similar stance — especially parents of young children. If there are any tech-savvy folks out there who want to make a ton of money, start developing some sort of social media policing service. Believe me, if you show up with a workable solution on Shark Tank, you will have every investor there in a frenzy! (Even Mr. Wonderful!)

On a side note, Snooki’s co-star and off-screen bestie Jenni “JWoww” Farley has also been dealing with negativity surrounding photos of her and Roger Matthews’ daughter Meilani, but as of two hours ago JMomm is still sharing: