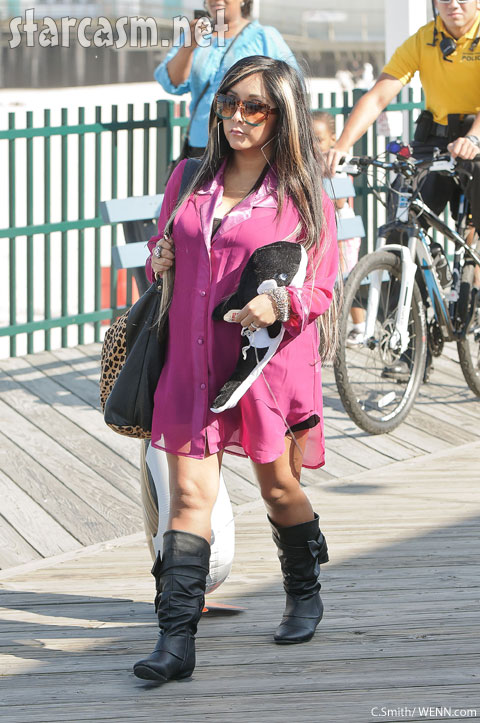 Nicole “Snooki” Polizzi shocked the world when she annonced that she was expecting a baby with her boyfriend, Jionni Lavalle ( everyone wasn’t so shocked when she announced it because it had been already leaked by The New York Post. The couple had met while filming Jersey Shore season 3 and in addition to their baby news, they also revealed they would be getting married. The two found out about Snooki’s pregnancy shortly after New Year’s and Jionni proposed just a couple months later.

Fans couldn’t believe that the hard-partying, panty-flashing guidette would settle down at the ripe age of 24, but she had always said she wanted to find her gorilla and make little guido and giudette babies! Now that Snooki’s got her gorilla and is engaged, will we see her as a pregnant bride? Not a chance!

Snooki and Jionni are going to have a long engagement. She recently revealed, “We just want to have the baby first, and then maybe in about a year and a half, we’ll start planning and have the baby in the wedding.” At that pace the baby will be nearly 2-years-old by the time they walk down the aisle.

We’re glad that Snooki isn’t going to settle for a shotgun wedding. Plus, she doesn’t really have time for one! She’s been busy promoting her new spin-off with JWoww, Snooki and JWoww, and is currently in Seaside Heights where she will remain until mid July when filming on season 6 of Jersey Shore wraps. Following that, she’ll have just two months left before her baby boy makes his debut!

Whenever Snooki and Jionni do walk down the aisle, we are sure to see plenty of animal print and pink — that’s for sure. Snooki previously said jokingly (we think) that she wanted bombs and fireworks at her wedding! While we wouldn’t be surprised to see fireworks, we think grenades would be more appropriate — let’s just hope they don’t come in the form of bridesmaids!

How did Snooki get her nickname?