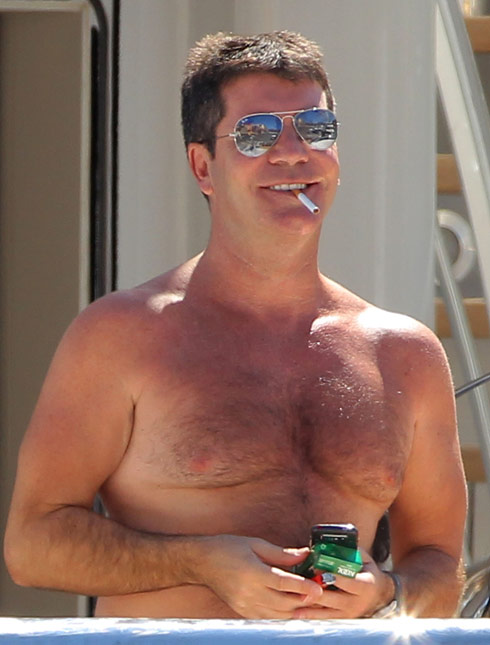 52-year-old Simon Cowell is a pretty successful and powerful dude (despite the fact that his American X Factor venture has so far yielded disappointing results,) and he’s also filthy rich and makes no bones about being vain. In fact, it seems he’ll try about anything to stave off the aging process (except, of course, give up his smokes.)

Reporter Tom Bower spent a good deal of time with Simon to research (Sweet Revenge: The Intimate Life of Simon Cowell.) He was eventually shut out by Simon’s camp, but had enough time with Simon to learn quite a lot of about the music mogul’s quest for The Fountain of Youth.

Here’s a breakdown of some of the beauty and health techniques Simon tries to offset aging, drinking and smoking (he prefers KOOL cigs, in case you were wondering:)

Cryogenically freezing himself: Simon decided against this, but according to Tom he seriously thought about paying a Swiss company $161,990 to freeze his corpse when he died in the hopes that science could someday revive him.

Just in the past few years Simon (along with, let’s face it, everyone in Hollywood and a growing number of the rest of the population) has embraced Botox injections twice a year to ward off wrinkles. He consulted with a French doctor, Dr. Jean-Louis Sebagh, who recommended the Botox along with vitamin injections

“To me, Botox is no more unusual than toothpaste. It simply works. You do it twice a year. Who cares, and it balances my smoking and drinking.”

His doctor suggested vitamin injections, but Danii Minogue turned Simon on to getting weekly vitamin IVs based on the resulted of frequent blood testing.

“He gets blood tests four times a year and ‘The full blood work’ every six months. Injections once a week of magnesium, all the b vitamins, and pure viatim c. In the US he recieves the mixture via intravenous drip on Saturday afternoons in his bedroom. He takes pills daily, and drinks one red and one green smoothie a day made from expensive rare fruits.”

According to The Wall Street Journal, those “rare fruits,” are “lingonberry, acerola berry, chokeberry and aronia juice flown in from exotic locations.” Don’t know what they taste like, but they sound amazing!

Simon has also commented about the IV drip outside of this book. He told HolyMoly.com:

“Even when I’m having a viewing session with producers, she just sticks the needle in me and we carry on whatever we are doing. It’s an incredibly warm feeling. You feel all the vitamins going through you. It’s indescribable but very calming. Everyone I’ve recommended it to has absolutely loved it. One girl had two orgasms during the treatment.”

“It’s so cleansing, and it makes my eyes shine brighter, and the whites of my eyes white.”

Not sure if colonics actually do affect the sparkle of your eyes, but maybe the idea of feeling clean does.

Apparently he doesn’t keep the beauty products all to himself. His female friends all know he has the latest products, and if you’re actually his girlfriend, you better know how to apply your own makeup, and FAST. “He doesn’t like to see his girlfriends in the morning before they are properly ‘groomed.'”

“Until recently he had a half-deaf woman visit weekly to cover him with oil, wrap him in cellophane, and squeeze him into a tube with the promise that the paralyzing discomfort and itching were guaranteed to detoxify and oxidize him.” He fired her because she kept pitching tv shows, and then payed $8,100 to try an hour long “bubble” treatment, which again left him unable to move while someone pitched him television ideas.

Along with all that Simon also indulges in massages, hair dye, chest waxing, tooth caps, and alleged cosmetic surgery.

But probably the best anti-aging strategy Simon has are simple, and childish even (you have to reconnect with your inner child.) He climbs tree every day and watches an hour of the Flintstones!

“It just puts me in a good mood. It’s less depressing than watching the news.”

That’s very, very true. Now stop smoking Simon! No about of vitamin drips and Botox can offset the negatives effects of smoking.