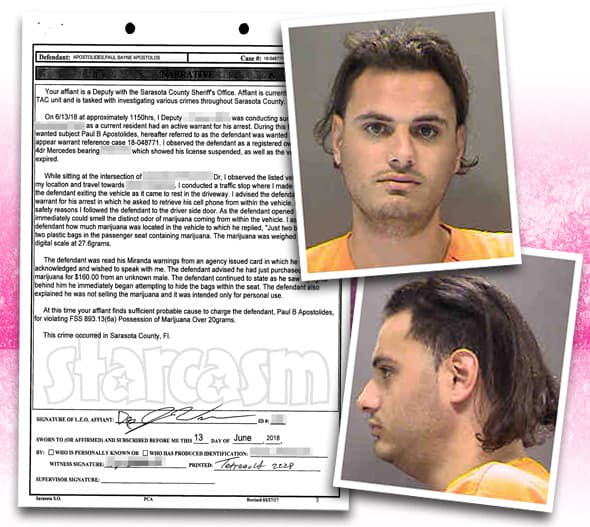 According to the police report, MTV’s “other Pauly” had a warrant out for his arrest from a failure to appear on a public drinking charge for an incident back in late April. Due to the warrant, a deputy was conducting surveillance on Paul (real name Paul Apostolides) when things went from bad to worse for the aspiring rapper.

Here is the full narrative from the police report:

On 6/13/18 at approximately 1150hrs, I Deputy *. ****** **** was conducting surveillance at **** ******** Drive as a current resident had an active warrant for his arrest. During this time I noted the wanted subject Paul B Apostolides, hereafter referred to as the defendant was wanted for a failure to appear warrant reference case 18-048771. I observed the defendant as a registered owner of a black 4dr Mercedes bearing ***-*** which showed his license suspended, as well as the vehicle’s tag expired.

The defendant was read his Miranda warnings from an agency issued card in which he acknowledged and wished to speak with me. The defendant advised he had just purchased the marijuana for $160.00 from an unknown male. The defendant continued to state as he saw my lights behind him he immediately began attempting to hide the bags within the seat. The defendant also explained he was not selling the marijuana and it was intended only for personal use.

Unfortunately for Pauly, any amount of marijuana over 20 grams is considered a felony in Florida. He was charged with third-degree felony drug possession and was later released after posting $1550 bond. Appropriately enough, Pauly enlisted the help of Bad Boy Bail Bonds. He has a scheduled court date on July 20.

In addition to last week’s marijuana possession arrest, and the public drinking charge from April, Pauly has an extensive list of previous charges, including a marijuana possession charge back in May of 2017. That time it was just a misdemeanor as the citation indicates Pauly was founf in possession of just 2.5 grams of cannabis in a “counterfeit prescription bottle.”

In February of 2015, Pauly got suspiciously lucky when he was caught with just under 20 grams of marijuana. Judging from the narrative on the citation, it sure sounds like he could have easily had more than that: 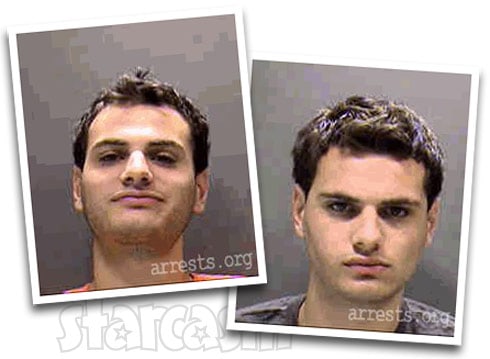 In Novmber of 2013, Pauly was pulled over for not wearing a seatbelt and was charged with misdemeanor marijuana possession after an officer found a “semi-burnt joint of marijauna” in the ash tray.

What is truly disturbing while scrolling through Pauly’s legal issues in Sarasota County are the sheer number and variety of violations having to do with vehicles! He has innumerable citations for expired tags, no insurance, no seatbelt, speeding, running a red light, and even one instance of displaying a handicap parking permit that didn’t belong to him!

Thankfully, I did not see any DUI arrests on the list.