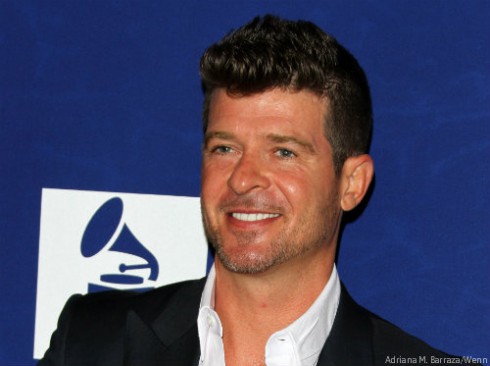 Did you hear the one about how a dog was hospitalized twice for eating weed its careless owner dropped on the floor? Haha, right? That’s how Robin Thicke’s younger girlfriend, April Love Geary, told it on Twitter. Except, it really isn’t a laughing matter.

In tweets from her private account accessed by TMZ, April said that terrier mix Bincy has made two emergency trips to the vet within the month they’ve owned the pup. She said the first time was because Bincy got into her and Robin’s stash of pot. The second time, she said, was all Robin’s fault: “IT’S NOT ME!!! Some falls on the ground or she sits by him smoking and just inhales it hahaha.” (April later clarified to TMZ the dog only ingested some garlic on the second occasion.)

Although weed is generally considered innocuous for humans, Colorado veterinarian Dr. Debbie Van Pelt warned CBS Denver viewers in 2012 that it ingesting it can be deadly for pets. Explaining there isn’t anything funny about an animal on pot, she said, “We need people to realize it is potentially toxic and potentially fatal to their pets.”

Craigslist ad for beagle Molly could have been written by M. Night Shyamalan

VIDEO Sleeping dog wakes up and sings along to Let It Go, then promptly goes back to sleep