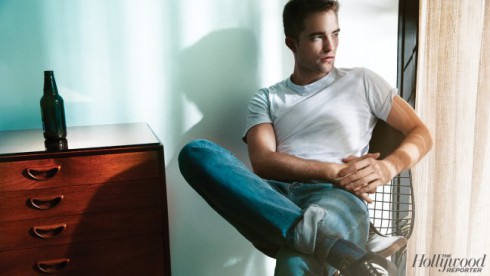 Robert is set to star in two art-house type films this year, the first being The Rover which June 20Oh and got praise at Cannes this year. The second is the satire Maps to the Stars, which is set to premiere this fall. The 28-year-old actor is trying to distance himself from the Twilight franchise and grow as an actor. He’s even cold-calling directors he likes, like Harmony Korine (Spring Breakers,) to get their attention. They ended up having dinner together, and now Korine is writing a script for Pattinson.

About Twilight, Pattinson reveals that although it was a positive experience overall, the pressure of the marketing got to be too much for him. “Everything changed when they did the marketing, and the general public started to view [the films] in a different way when they started to push the ‘team’ aspect of it,” he told The Hollywood Reporter. “It was like, ‘I’m on Team Edward or Team Jacob.’ That saturated everything, and suddenly there was a backlash. Whereas with the first [film], there wasn’t a backlash at all.”

He’s keeping his life simple now. He recently sold a $6.27 million mansion because he felt it was too much for him. “It was too big a house,” he says. “It was incredible, like Versailles. It was absolutely, completely crazy. It had this incredible garden, but you just stay in one room, anyway. I could basically live in a cell as long as I had a window . . . I buy nice guitars, and that’s about my only expense.”

He’s now living very simply in a rented home in a gated community where he’s been sleeping on inflatable mattresses, and finding it difficult to locate most of his possession. “I don’t understand how I don’t have any clothes,” he groans. “I’ve basically stolen every item of clothing that anyone’s ever given me for a premiere, but in my closet there’s literally about three things.”

He sometimes plays poker with Kellan Lutz, but when asked if he still talks to Kristen Stewart he simply replied “Oh, yeah.”