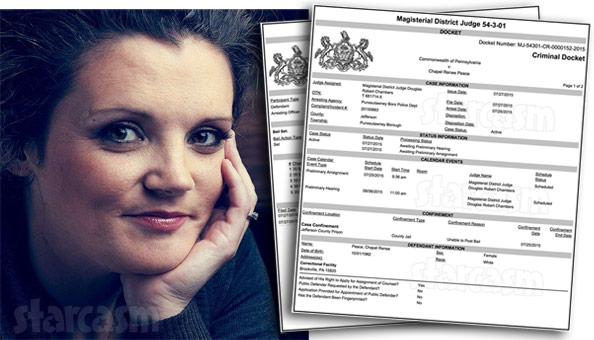 Breaking Amish and Return to Amish star Chapel Peace was arrested Saturday and charged with multiple counts of drug and drug paraphernalia possession. The arrest comes after months of reports from friends and family that she was struggling with drug addiction, and several disturbingly dark Facebook posts made by Chapel herself.

According to the police report, 33-year-old Chapel Renee Peace was arrested on a bench warrant issued by Clearfield County and was found to be in possession of heroin bags, Valium without a prescription, and syringes. (As far as why Chapel is using her maiden name, she has reportedly filed for divorce from husband Andrew Schmucker, so perhaps she has already made the name change?)

According to posts made on a Breaking Amish Facebook page frequented by friends and family of Chapel, she was riding with a friend who was pulled over by police. She had an outstanding warrant for an unpaid traffic ticket, and that’s when police found the heroin baggies, 2 needles and a pipe. Chapel reportedly told the officer that she had already taken the drugs.

I was unable to find record of Chapel being in jail, but according to online records, she had her arraignment hearing Saturday and was unable to post the $50,000 bail.

Here is the court docket report — click to enlarge: 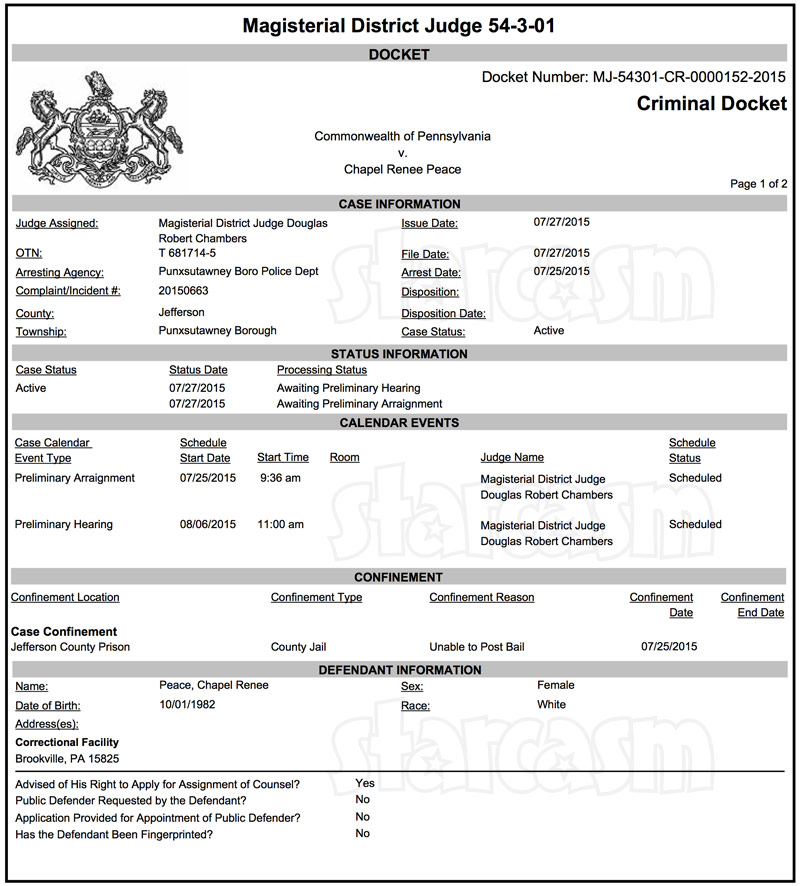 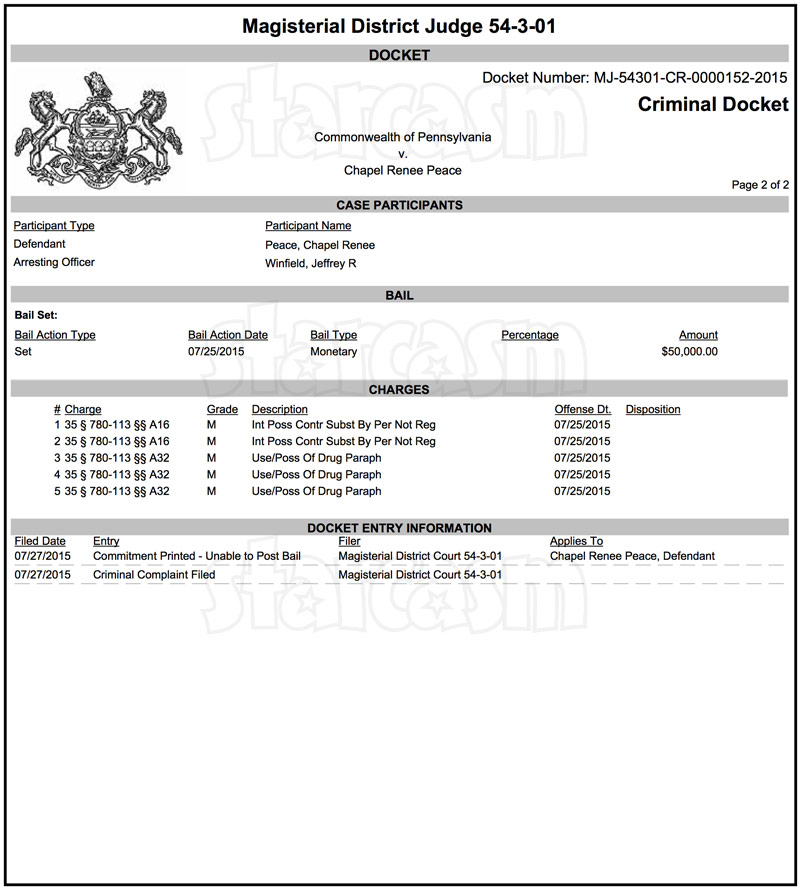 Her next hearing is scheduled for August 6.

Chapel has had a very difficult year, dealing with health issues in the fall, the arrest of her husband Andrew Schmucker, and a very serious car crash involving her sister Ashley. As mentioned above, she has been posting very concerning entries on Facebook over the last few months. Here is a timeline of some of those:

Its time I Say what’s on my mind, your all so quick to judge but really you don’t even know me.. you don’t call , text, stop over you make no attempt to be a part of my life.. you have no idea how sad and alone I truly am .. you have no idea how dead I feel inside.. you see what I want you to see but f**k it .. everyone thinks I choose to be the way I am .. I alone and drowning inside these thoughts in my head.. really Kolden and kadence are the only reason I haven’t f**kin killed myself yet.. but hey why don’t you talk some more sh!t for me to hear or read cause that always helps… I used to feel so free so alive I used to smile and laugh I used to feel loved .. now I feel numb while my body lies limp in a crumpled pile of shame in the dark… don’t say I didn’t tell you this day would come .. goodbye to those who thought they knew me but never really cared enough to make sure I am okay.. don’t feel bad now that its to late..

Words– such a dangerous thing f**k do they hurt like hell… I hold the bitter truth deep within only your god can see my sin.. my world is on spin cycle and not a person or thing I can grasp onto… can you hear that echo????

That girl you knew and loved she is laying helplessly in the darkest depths of a body she is screaming and begging for forgiveness while this lost soul pushes forward… Plz don’t think she doesn’t cry for you for the love and friendship that once was but is to far gone to be heard.,. The energy the laughter the smiles the plain out craZineas she craves but all she gets in silenced and told there is no hope so quit searching for the light that no longer shines.. finally alone no one left gone and pushed the last ones away fade into a world once full of life only to find ashes of a life burned to hell once lived but only to be forgotten….. — feeling broken.

It was recently reported that Chapel was in outpatient treatment for her addiction, and a source close to her says she was two weeks sober prior to Saturday’s incident.

It’s obvious Chapel was in desperate need of help, and perhaps this arrest will be the rock bottom she needs. It is unclear just how much time she is facing, especially since all of the charges are misdemeanor ones, but perhaps it would be good for her to serve 60-90 days without access to drugs.

We wish Chapel the best and hope she is able to finally get sober so she can get back to her life, which includes being a mother to her two children.