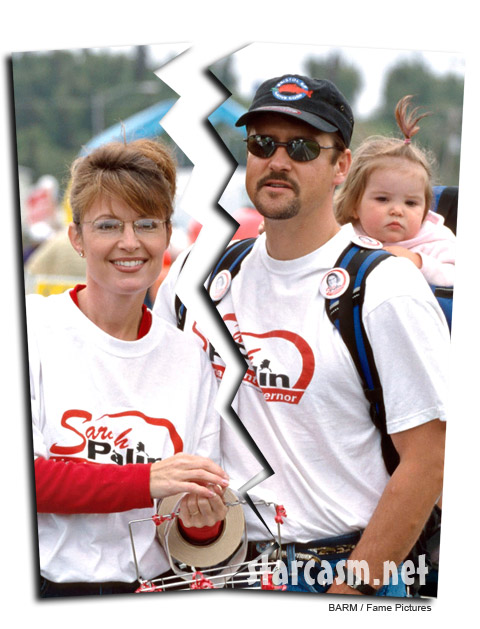 The Immortal Minority Blog has sources close to the Palin family that say the couple is headed for divorce. The story has been picked up by other sites, including the Alaska Report, which was site that broke the “Iceberg Scandal” story that revealed Sarah Palin would be resigning as governor weeks before she stepped down.

IM addresses the fact that Palin had been sans wedding ring during the farewell picnics and says Palin tossed it in a lake in a fit of rage. They’re unclear which lake. They also link Srah’s recent weight loss, hair loss and general quietness (including a lack of tweeting) to stress stemming from the separation. 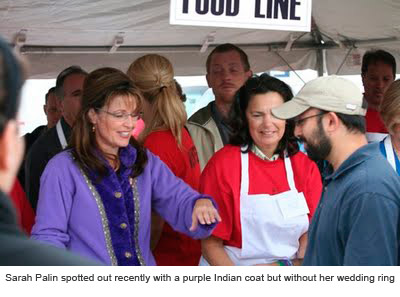 The announcement will not be made for some time due to monetary reasons, but Todd is already sleeping on the couch, according to the source.

The source also says the former governor has purchased land in Montana and she may be considering relocating her and the children there, but Todd does not want to leave the state.

But, the source didn’t stop there! Also revealed was an incident that occurred before Palin was a candidate for vice president in which Todd Palin pulled a gun on Levi over some disagreement over his relationship with Bristol. Apparently that story will be printed in an Alaska publication soon.

More “explosive” Palin news will be revealed in the October issue of Vanity Fair, in which Levi Johnson reveals “heretofore unknown information.” The person that usually is there to make sure Levi doesn’t say too much (Tank Jones) wasn’t there for his VF interview, which might be part of the reason.

Check out the Immortal Minority for more info and updates, including details abou Levi’s mother’s trial and the influence Palin was allegedly exerting on prosecutors.