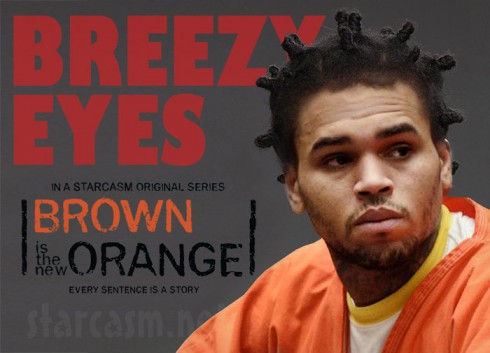 BET is reportedly holding focus groups to determine if viewers would want to see a reality show starring troubled singer Chris Brown as he tries to stay on the straight and narrow after being released from jail.

According to TMZ‘s “multiple sources familiar with the situation” BET has already spoken with several production companies who are currently angling to sign Brown, but so far he is still a free agent.

As far as the focus groups go, TMZ says a recent one held Tuesday in the San Fernando Valley featured all African American women and the results were split — “but the majority said they’d watch to see if Chris would screw up.”

So would you tune in to a Chris Brown reality show?

UPDATE – It seems the question may be moot as a TMZ cameraman caught up with Chris Friday night and asked him about doing the reality show. Chris responded by saying, “No, not for me man.”

* Yes, the above graphic of “Breezy Eyes” in Brown Is the New Orange is something we just made up.