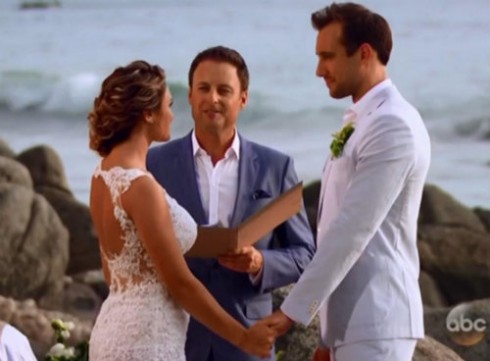 We all know reality television often blurs the lines of reality, but this week’s episode of Bachelor in Paradise may have gone too far: Despite featuring the “wedding” of Lacy Faddoul and Marcus Grodd, it was reportedly all a sham.

Even though most major entertainment publications documented the “marriage,” TMZ reports Lacy and Marcus are not legally married in the United States or Mexico (where the wedding took place). It seems the scene was little more than a rating’s ploy — which worked, considering viewership was up 18 percent from the first half of the premiere the night before. The not-actually-newlyweds also used it to promote Lacy’s new fragrance, “I Do.”

Happiness // You can now buy my perfume I wear on my wedding day // I Do. #bachelornation lacyfaddoulperfumes.com

It seems Lacy and Marcus are still engaged and planning another, official ceremony. They got engaged during the first season of Bachelor in Paradise.