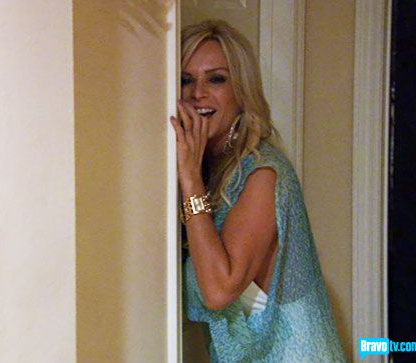 Tonight’s episode of Real Housewives of Orange County was Too Much in that good/bad way that makes these Housewives franchises so guiltily appealing. The perfect set-up was Peggy and Micah’s dinner party, which featured “literally the next Sade,” a 5-course perfectly wine-paired meal from Susan Feniger, card tricks, the works. Everything was supposed to go very smoothly, and nothing bad was going to happen. Micah even wore his Gucci jacket and his Brietling watch (which matches his Bentley)! Thankfully, there was no drunk psychic with ill-intentions, but everything pretty much train-wrecked on cue, as if they were in a Tennessee Williams play.

Gretchen readied herself by getting her hair did and complaining about her boyfriend, Slade Smiley, who has no end of child support legal issues. To be fair, his child support was too high since he used to make bank, and is now unemployed, but she’s right to be apprehensive about marrying and/or procreating with Slade at this time.

Next, Tamra brings her new boy Eddie to meat Vicki, who gave him a triple-over-and-a-half. She did some face gymnastics, but by the very end of the evening she’s decided that he was an okay guy. The whole group (including Donn) had quite a time discussing Slade’s latest child support issues (while he was trying to go to court to reduce his child support payments, his ex-wife sued him for contempt.)

Peggy introduced everyone to the next Sade (you know, what’s her name,) who sang her heart out while Tamar and Eddie grinded on each other and made love with their eyes while everyone else looked on in jealousy and contempt. Sure, that kind of thing is fun for the two punch-drunk people in love, but nobody wants to watch that. At least wait until everyone else is liquored up first! 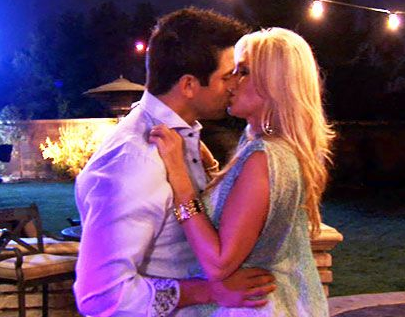 Donn had a good laugh in Gretchen’s face over Slade being a no-show on the day that more news broke about him being a deadbeat dad, while Gretchen’s gay date joked that Tamra had ordered her beefcake and affectionate boyfriend Eddie Judge from an escort service. Cue the minstrels! Donn was on a role that night because he told Vicki that Gretchen looked like “The lady from The Munsters.” I’m not sure what kind of wine Donn was drinking, but Gretchen looked really lovely that evening, and even Vicki bristled. 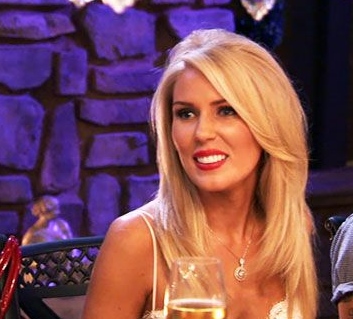 Then Alexis Bellino (who was waring Alexis Couture) sat down, who was without her husband at a dinner party for the first time ever, and was not emotionally prepared. First, Peggy seemed shocked that Jim couldn’t make it, and made Alexis feel bad, so she lied and said he was working, when in fact he didn’t want to be around all the “drama.” So, barely after the first course was served, Alexis was in the bathroom crying because Jim wasn’t with her. It’s a dinner party, such it up a little.

Gretchen followed Alexis into the bathroom after 20 minutes, to give Alexis a pep talk.

Tamra was a little more than intrigued at this turn of events, and suddenly had to go pee. Really badly. So badly that she had to put her ear up to the door and grin gleefully to keep herself from having an accident. It happens to the best of us. Peggy went to check on the situation, told Tamra to use the upstairs facilities, and asked Alexis to put on her big girl panties and join the party or leave so they could serve food. It was to no avail, and they feasted without Alexis.

Meanwhile, back at the table, Vicki and her soon-to-be-ex-husband Donn had an uncomfortable conversation about why they didn’t have a baby together. More on that here.

Lexi did make it out of the bathroom in time for Tres Leche cake for dessert, and must have tried some of the delicious wine because within minutes she was grinding on her gay date and Gretchen as if she hadn’t a care in the world. At least she was able to have some fun at the party without Jim! Who needs Jim? 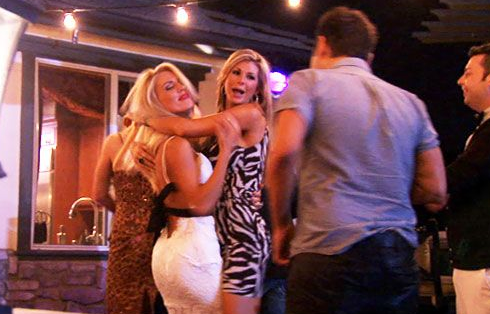 Afterwarda, on Watch What Happens Live with Andy Cohen, Alexis revealed that she was going to develop a lip gloss line called Jesus Barbie, in reference to a nickname Tamra Barney called her (which originated from David Gilmore, Housewives portrait painter extraordinaire of Pretty on The Outside.) W T F? Jesus Barbie lip gloss. I think I like it. Put me down for a case.

BTW, a shout out to Andy Cohen for his mad reporting skills when breaking the news that the U.S. has killed bin Laden. Bravo, they’ve got cat-fights AND serious news.

Did Tamra Barney and Simon Barney get a divorce? See the documents!