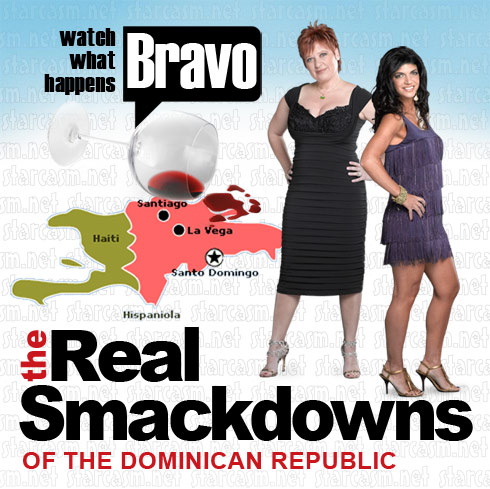 In what could very well be considered an aggressive military action by the United States, or perhaps even a declaration of war, The Real Housewives of New Jersey have invaded the Dominican Republic to tape a segment for the upcoming season of their popular reality series on Bravo. As you might have expected, the their presence has resulted in a brawl of sorts at a local nightclub.

TMZ reports that “Multiple cast members on The Real Housewives of New Jersey were involved in a bar fight at a Hard Rock Hotel in the Dominican Republic this week.”

The site says the incident took place around 1:00 AM Wednesday morning and involved a cast member smashing a drinking glass over a male patron’s head, resulting in an injury that required medical attention!

From TMZ: “So far, it’s unclear which cast members were involved in the fight — but we’re told Teresa and Caroline had been spotted at the Hard Rock that night.”

Can you say, “Prostitución prostituta!”

UPDATE – From The Baltimore Sun:

[Joe Giudice’s] last scrape with the law was on Feb. 23 when he was partying with Real Housewife Teresa and the rest of the cast around 1 a.m. at the Hard Rock in Punta Cana, Dominican Republic. The trouble started when Joe popped a bottle of champagne and doused some other patrons, leading to a brawl, radaronline.com reported. A Radar source reported that Giudice severely beat one man and hit another with a glass during the fight, which ended with Dominican police detaining everyone involved.