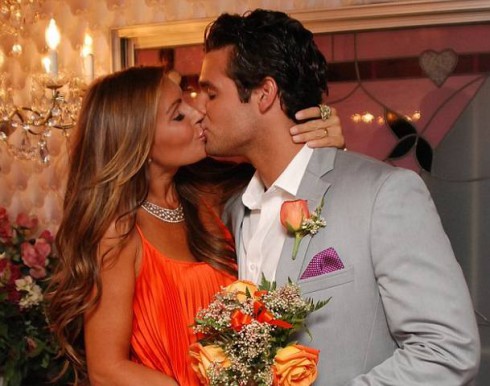 According to sources with TMZ, the relationship has been a tumultuous one that has included many explosive arguments. TMZ was also told that Matt alleges that Rachel slapped him after he repeatedly called her names.

The bad blood between the two is said to have resulted in a 911 call from Uchitel on May 16 in New York City in which she asked authorities to have Hahn removed from their home following a verbal exchange. Rachel, who is famous for having been “the other woman” with married men Tiger Woods and David Boreanaz, did not follow up and no charges were ever filed.

Rachel’s rep told Us, “It is Ms. Uchitel’s goal to resolve this action amicably, quickly and quietly and not in the media. No further details of the action are being released at this time by Ms. Uchitel.”

Uchitel and Hahn were married at Little White Wedding Chapel in Las Vegas in October of 2011. The couple welcomed their daughter Wyatt in May 2012.

Radar has sources close to Uchitel that are claiming she is shocked by the claims and that she is prepared for an intense custody battle.

The marriage to Hahn is Uchitel’s second. She was also engaged to investment banker James Andrew O’Grady, who was killed on 9/11 during the World Trade Center attacks.

Uchitel was a cast member on the 4th Season of Dr. Drew’s Celebrity Rehab. In August of 2012 she spoke with Us about trying to get her life on track. “I’m more focused on my daughter now than I am on myself. I have a plethora of life experience that I will absolutely discuss with her. Because, frankly, every right and wrong turn I’ve made has made me who I am. I’m thank for all of my experiences.”

Peggy Tanous files for bankruptcy, claims to be divorced