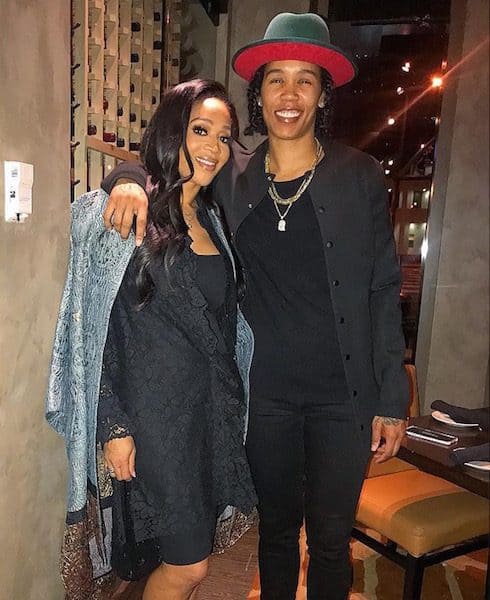 They’ve been together for a surprisingly long time — but who is Ty Young, Mimi Faust’s camera-shy girlfriend? Though Ty didn’t appear on earlier seasons of Love & Hip Hop Atlanta, it seems she’s ready for a little of the spotlight this time around. Ty appears alongside Mimi in the LHHATL Season 7 premiere, suggesting viewers might be treated to a whole lot more of the couple this year.

As we reported before LHHATL Season 6, 46-year-old Mimi and her 31-year-old boo have been dating publicly for over a year now. But they first appeared in each others’ social media feeds at the end of 2016, and may have actually started seeing each other well before that. Here’s a recent #TBT photo Ty shared of herself and Mimi from May of 2015. They may not have been dating all the way back then, but the two have known each other for around three years:

The 6′ 2″ Ty has been a WNBA fixture since the Atlanta Dream drafted her eighth overall back in 2008. She spent her rookie year with the Dream before being traded to the Chicago Sky during the off-season. Ty then played for the Sky until last year, when she made a brief return to the Dream. (Mimi references the return in the LHHATL Season 7 supertrailer, though the two teams’ names are beeped out.)

Currently, Ty plays for the Las Vegas Aces. As far as the Ty Young WNBA contract details go, though, they remain under wraps. The practice is fairly common in the WNBA; the terms of Ty’s 2015 contract extension with the Sky weren’t made public, either.

One thing we’re hoping the coming season of Love & Hip Hop Atlanta makes clear is why Ty and Mimi had a change of heart about letting their relationship appear on-screen. The two were pretty firmly against it before Season 6 began airing. And Mimi reaffirmed the couple’s decision in a high-profile interview with Rolling Out after the season ended.

“Every time someone gets on television with their relationship, it gets messed up,” Mimi explained. “We’re trying to manage what we have. If she does a cameo, it’ll be Facetime or a phone call. But if we do it, I need to be sure it’s going to be a safe scene.” (Plus, elsewhere in the interview, Mimi said that “Ty is super shy. I mean, super shy.”)

We hope Mimi and Ty are able to weather the storm of reality TV drama and emerge from this season unscathed, too. We’ll see when the new season drops: Love & Hip Hop Atlanta Season 7 airs Mondays at 8 PM on VH1.

Who is Rooney Mara dating?