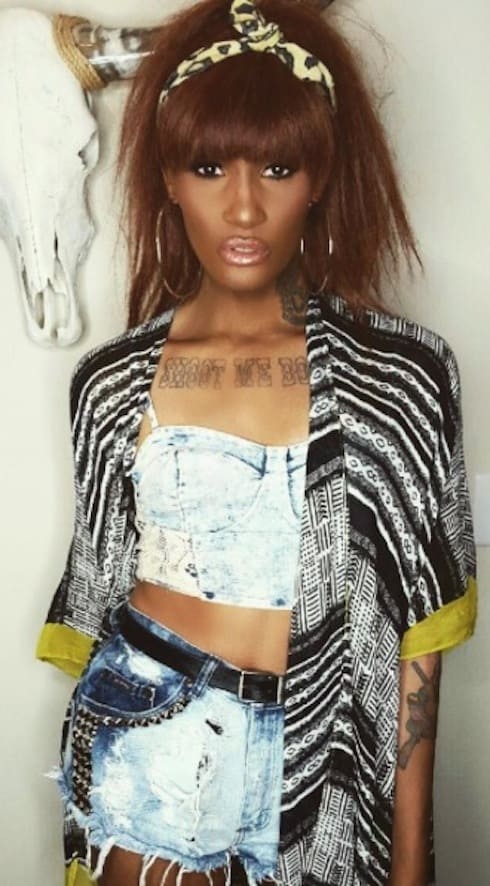 Who is D. Smith? The Grammy-winning producer and recording artist is best-known for writing one of Lil Wayne’s biggest hits, but that’s about to change with her inclusion in the cast of Love & Hip Hop Atlanta Season 5. In fact, D. Smith is the first transgender cast member to appear on any show in the Love & Hip Hop series; and now, in her own words, she’s ready for her close-up.

D. Smith made his (at the time) name as a writer and producer with the track “Shoot Me Down,” on Lil Wayne’s 2008 album Tha Carter III. That album took home the Grammy for Best Rap Album the following year, and Wayne credited D. Smith’s song with some of the album’s success, often referring to it as a highlight. “I know one thing,” he told Billboard upon its release. “I recorded a song…called ‘Shoot Me Down,’ that might just be the biggest song of my career. It’s where I’m at right now—emotionally, financially and mentally. It’s like looking in the mirror and seeing exactly what’s in there.”

In fact, Lil Wayne was so enamored of Smith’s composition that he invited Smith to sing the song with him on Jimmy Kimmel Live:

But the highlight was still years removed from D. Smith’s eventual transition. Smith has been transitioning from man to woman for over a year, and recently told fans and followers that the man she had been “was put together with bits and pieces of what society wanted,” but not what Smith knew to be true about herself. Thanks in part to the publicity that Love & Hip Hop Atlanta Season 5 will bring, D. Smith took to Instagram with a long, moving explanation of how she came to be who she is:

A lot of people loved the person on the left but, this person was put together with bits and pieces of what society wanted. This person was so far gone in satisfying everyone else, that one started to loose touch with one’s true authentic self. That person use to be me! I’ve judged people for being who they were. I was angry and insecure. I dated beautiful girls. When I say beautiful, I mean BEAUTIFUL girls that I cheated on with men because I couldn’t fight my deep feelings for them. Afraid of loosing or disappointing my family and friends, I lived a terrible lie. I’ve hurt so many people because of this. My career. OMG my career! ? The church, going to the gym, selling music, the money and most importantly, my life. I could loose it all. To be honest, I’m ashamed of the person I use to be. To think, I’m not the only one with this story… Hello, I am D. Smith. That sexy, fearless and last but not least, genius ? woman on the right is me! I am officially 1year and 6 months into my transition. With that being said, for the first time in my life I am honest. Not only to myself, but to the world around me. I have nothing to hide, which leaves me no choice but to live free. Now I don’t have to worry about hiding in the shadows of a lie and feeling that horrible feeling when I hurt someone that I truly care about. This message isn’t an attempt for acceptance and to be quite frank with you MF’s, I don’t give a f*ck! Lol. I wrote this because I am no longer hiding! I am a PROUD Trans Woman!!!!!?? #transisbeautiful #love #me #trans #new #beforeandafter #2016 #God #blessed #pride #girlslikeus #fashion #lgbt #power #all #beautifulpeople #us #now #fashion #face #music #happy #finally

Smith also raised awareness for the plight of transgendered artists in hop hop by participating in a panel discussion of bisexual & transgendered identities. The discussion was put together by VH1, filmed before a studio audience, and aired as the special “Out in Hip Hop”:

Other than filming LHHATL, Smith has been busy promoting her latest musical endeavor, which also happens to be about her transgender journey! Her track “I’m That B*tch” won praise for its frank honesty upon its release last September. It’s clear from the song’s official video that D. Smith is determined to be exactly who she is–and, the more cameras there are, the better:

As far as social media goes, it doesn’t look like D. Smith is a big fan of Twitter; she’s only sent out a handful of tweets over the past couple of years. You can follow her at @truedsmith; she uses the same handle on Instagram, where she appears to be much more active, updating a few times per week.

Of course, it stands to reason that D. Smith, along with every other member of the cast, will step up their social media game when the new season of Love & Hip Hop Atlanta debuts in a few weeks! The Season 5 premiere is set to air Monday, April 4th, at 9 PM EST on VH1.