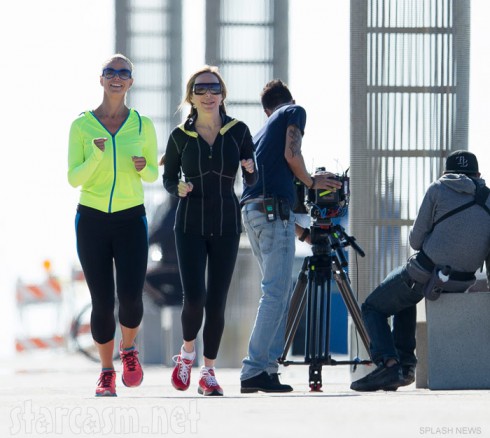 Filming for the third season 3 of The Real Housewives of Miami got underway yesterday, March 28, in South Beach. Marysol Patton and Alexia Echevarria hit the beach in their workout gear and went for a waterfront run with Bravo cameras in tow.

So far, the network has yet to confirm that the series will be returning, but these photos speak for themselves. Marysol and Alexia will be returning and, according to reports, so will the rest of the ladies, except for Karent Sierra, who claims to have left the show to “focus on other TV projects.” Other sources claim she got the boot.

Marysol will be returning to the show as a friend of the Housewives instead of an official wife and Alexia will likely be coming back to her role as official Housewife after taking on the “friend” role in Season 2 to concentrate on her son Frankie’s recovery from a bad car accident.

Last week, Marysol posted a photo on Instagram of her, Ana Quincoces, Lisa Hochstein, and Alexia with the caption “Season 3 filming has begun.” Joanna Krupa has also been tweeting photos of her and the cast. In fact, the only one who hasn’t been tweeting or seen in photos with the cast lately besides Karent is Adriana de Moura who at the end of season 2 was involved in a bit of a marriage scandal.

Although Adriana claimed to be planning a spring wedding to her longtime fiancé Frederic Marq during the season 2 finale, a wedding certificate claiming they’ve been married for years seemed to paint her as a phony. However, her publicist claimed that there was a “discrepancy” with the certificate but didn’t take the necessary steps to fix it so they are actually not married.

Could we have two season 3 weddings ahead of us? We’ll have to wait and see. Or should I say, watch what happens!