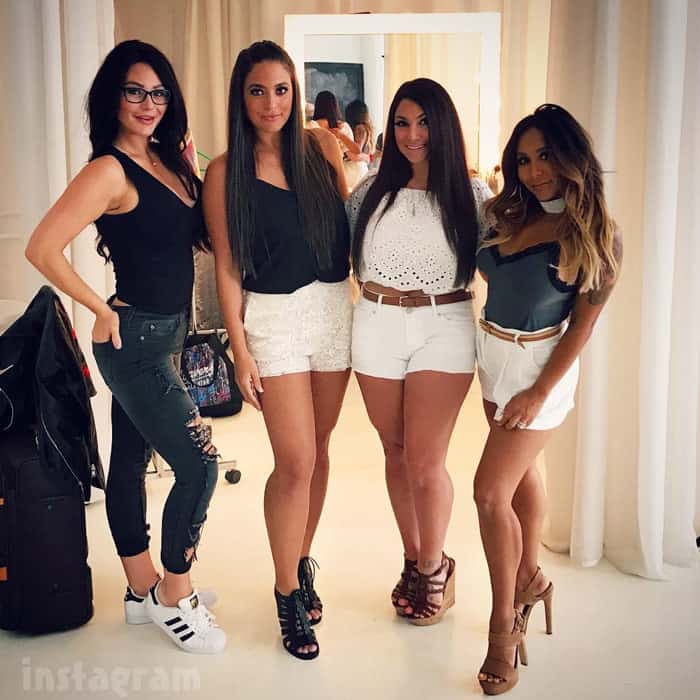 We have some HUGE news to announce for Jersey Shore fans as Jenni “JWoww” Farley has revealed she is in talks with the show producer about a Jersey Shore reunion series! In addition to JWoww’s comments, other cast members have been hinting that something is in the works on social media as well! [*UPDATE – Including “receipts” in the form of photos from Snooki!]

JWoww spilled the tea on talking with 495 Productions’ SallyAnn Salsano in a recent interview with E! News. When asked if a there is a possibility for a Jersey Shore reunion show(s), she says “I’ve actually been texting the creator of Jersey Shore.”

Of course, JWoww and the rest of the crew are (for the most part) more mature now with completely different lives and even children for some. “How do we make this happen?” the 31-year-old mother of two asked SallyAnn. “I need to be in bed by 9PM. I have to take my family and don’t let me get white-girl wasted so I can’t find where my family is. So if you can help me out with those, I’d be down.”

Another hurdle will be how to handle the concept of the reunion, because just as JWoww says, it clearly cannot be all of them getting drunk, partying, fighting, and having sex every night. Or, as JWoww puts it: “We’re old and boring now.”

But JWoww wasn’t without help as she described her ideal reunion situation to be “10 days filming on an island somewhere!”

Prior to JWoww’s reveal that she was talking with SallyAnn, she and other Jersey Shore co-stars shared their opinions on a potential reunion with In Touch. Sammi told the tabloid she “totally would” be down for it, adding that “she doesn’t know why it hasn’t happened already!”

Vinny Guadagnino had previously stated in April that “There are some things in life that are like, no I’m not gonna do that if it doesn’t fit me, but of course I would love to. Whatever entertains people.” He echoed that sentiment to In Touch, telling them that he is “down for a lot, as long as it’s entertaining and as long as it’s funny.”

Mike “The Situation” Sorrentino took things one step further by telling In Touch that “something DID happen and it was awesome!”

It seems The Sitch is right! There were several photos that surfaced online earlier this month showing the Jersey Shore cast together on the the boardwalk! Check ’em out:

UMMMM THIS IS THE CAST OF JERSEY SHORE AND I AM SO CONFUSEDDDDDDDDD pic.twitter.com/fmfetneOvE

Snooki also shared a Snapchat video that apparently featured some of her JS buds. She was coy about any concrete deets though: 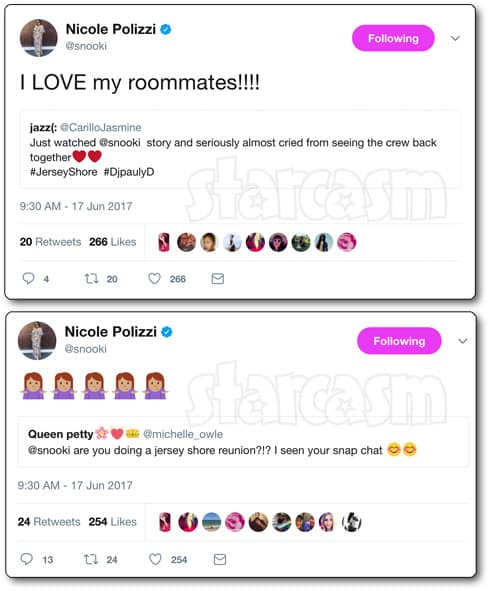 Snooki captioned one photo at the top of this post with “REUNION TIME ??❤” and for this next one she wrote “Loving these girls forever ❤ #myfamily #bestfriendsforever #rideordiebitches #truefriends #realbitches” 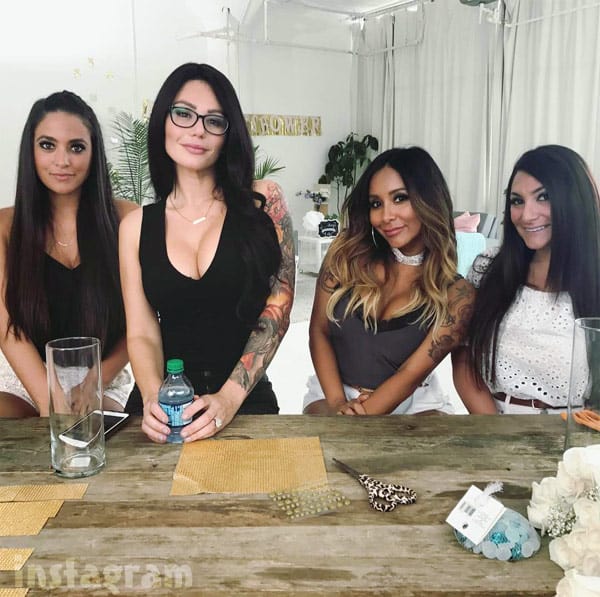 I couldn't go to seaside without visiting my once summer home ❤️ #jerseyshore #jerseyshorehouse pic.twitter.com/TLNl15W7wm

The Situation has been the most outspoken about a potential reunion. I have collected a number of his suggestive reunion tweets (and co-star reactions) for you here:

Something new is coming

So whatya think? Are you excited for the Jersey Shore reunion — which looks to be an almost certainty at this point (in some shape or form)? I don’t know about you, but my fist is pumpin!!