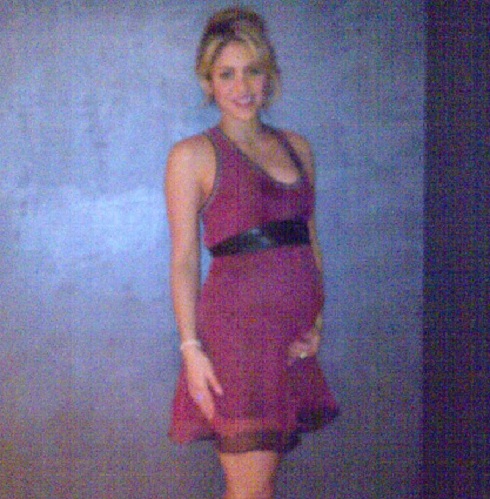 Shakira revealed that she and her boyfriend, soccer player Gerard Piqué, were expecting just 3 weeks ago, and already the singer is sporting a pretty big baby bump, which she showed off to her Facebook friends over the weekend. While there’s still no word on when she’s due, Shakira looks to be anywhere from 4-5 months along.

“Now I don’t have a six pack, only one pack!!” she wrote on October 6 along with the photo of her holding her growing bump. In the pic, it also looks like she may have a sparkly ring on her left hand, but no engagement has been confirmed. Earlier this year, Gerard told the Associated Press, “Right now we have a beautiful relationship. In the future, the next step of any couple in love is to get married.”

Shakira still hasn’t revealed when she is due, but we do know what she’s having . “It’s gonna be a boy,” Shakira revealed last week. “This guy [Gerard] is the best thing that ever happened to me in my whole life. And now we are having a baby.”

The two began dating about two years ago following Shakira’s split from her long-time beau, Antonio de la Rúa, after eleven years together. During her relationship with Rúa, Shakira said that marriage wasn’t something she felt she needed to do. We’ll have to wait and see if her views have changed since meeting Gerard and becoming pregnant with his baby.

Congratulations to the happy couple on their pregnancy!