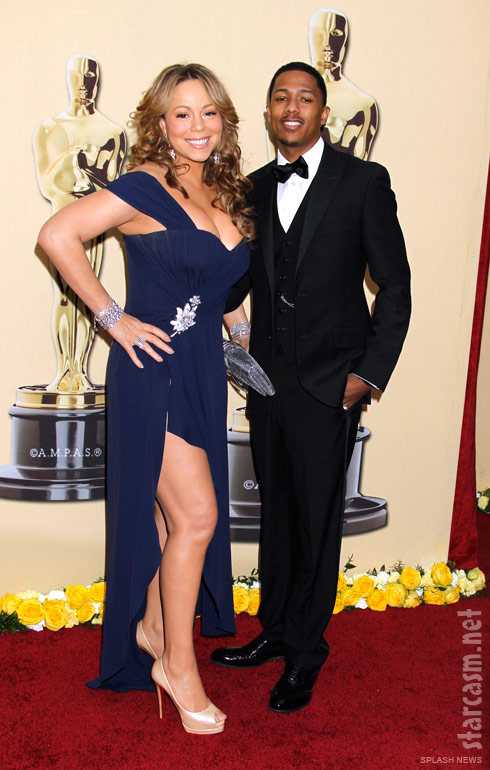 Singer Mariah Carey is doing fine after delivering twins earlier today at an undisclosed hospital in Los Angeles. The brother and sister’s birthdays fall on April 30, which is also Mariah and husband Nick Cannon’s wedding anniversay! (The couple was married three years ago in a sunset ceremony at the pop star’s Bahamian estate.)

[Carey’s representative, Cindi Berger] tells PEOPLE “she’s doing great” and they were listening to Carey’s “We Belong Together” after the children were born. “I spoke to both of them and they are both completely overjoyed.”

The names of the newborns have not been revealed as of yet. All we have to go on is what Nick told People in January: “They won’t be crazy names like Carburetor or something,” he promised. “But they’re definitely unique.”

Just in case Nick and Mariah were still debating on what to decide and needed a bit of guidance, let me offer up my Top Four List of Worst Mariah Carey Baby Names! (I am assuming of course that both children will be taking on the Carey surname.)

(I realize that was three boys and one girl’s name, but unless I ran with Apothe as a girl’s name that was all I could come up with)

UPDATE – Nick tweeted about the birth, writing “My wife just gave me the most incredible anniversary gift ever in life! I won’t ever be able to top this!” Here’s a screen capture of the jubilant father’s statement:

The congratulations are pouring in from all sorts of celebrities on Mariah Carey’s Twitter profile – just click the link to read them all!