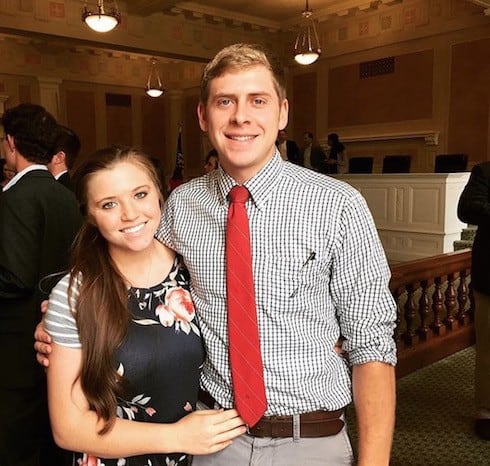 The latest pregnancy gossip from the land of the Duggars focuses on Joy-Anna. She recently shared a baby bump photo update that had family fans and detractors alike doing so many double takes that the hot topic du jour is, quite simply: Did Joy-Anna Duggar get pregnant before marriage?

First, though, let’s set the stage. Joy-Anna wed her husband, Austin Forsyth, on Friday, May 26th, or just under six months ago. Then, just a touch over three months later–on August 30th, to be precise–Joy-Anna took to Instagram to announce her first pregnancy. She used a triptych to make the announcement: one artsy photo featuring a bowl of ice cream with the words “Eating For Two” on the side; one faceless baby bump selfie, and one shot from more or less straight on, featuring both Joy-Anna and Austin cradling her tummy: 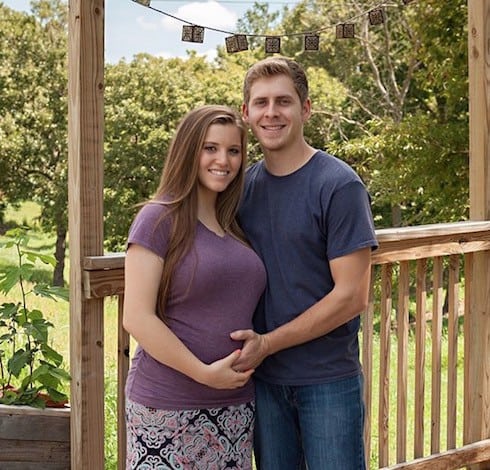 Joy-Anna didn’t share another baby bump pic until about a month later, on October 2. That update’s caption included very specific details about the growing fetus’ size: 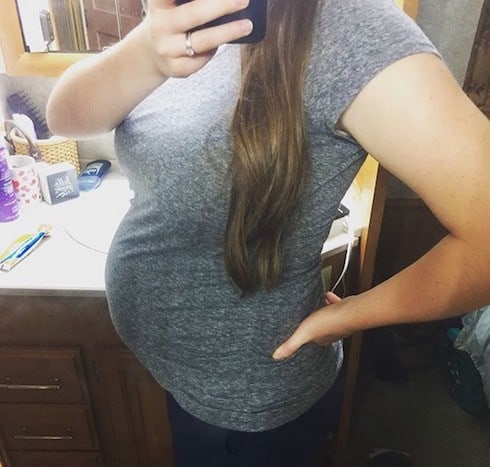 Can’t wait to meet our baby!! ?? I got to feel it kick for the first time a few days ago!!! Soooooo amazing!!! It’s already about the size of a bell pepper and weighs around half a pound!!! #childrenareagiftfromGod #westandforlife

As In Touch pointed out shortly thereafter (citing pregnancy resource Baby Center to do so), a fetus with the size and mannerisms that Joy-Anna described is generally about 18 weeks along. At that stage, the size is approximately “7 ounces and is roughly 5 1/2 inches long,” and the fetus can often be felt “flexing his arms and legs.”

If Joy-Anna was 18 weeks along in early October, her due date would be some time in February of 2018, suggesting that she got pregnant in May. But, no big deal, right? After all, there’s no better time than the wedding night itself for the chaste to get to work conceiving. (Devotées will recall that Jessa Seewald’s post-marriage advice to her sister was “Just enjoy being a couple,” which is sound stuff.)

But the question “Did Joy-Anna Duggar get pregnant before marriage” has really caught fire in the aftermath of Joy-Anna’s newest baby bump pic. She shared it on Veterans Day–and appears to be considerably farther along:

We are so thankful for the men and women who have served to defend our freedom! Grateful we got to spend the day with my grandfather who is a Army veteran. "Blessed is the nation whose God is the Lord; and the people whom he hath chosen for his own inheritance." (Psalm 33:12) "Freedom is never more than one generation away from extinction. We didn't pass it to our children in the bloodstream. It must be fought for, protected, and handed on for them to do the same, or one day we will spend our sunset years telling our children and our children's children what it was once like in the United States where men were free." ~Ronald Reagan

As Inquisitr has since noted, someone claiming to be a Duggar family friend has taken to both Reddit and the Duggar Family Blog in an attempt to debunk rumors about Joy-Anna and Austin conceiving out of wedlock. But that person only said that such a scenario was “not likely”–and also insisted on remaining anonymous.

Of course, all women show differently: some have very prominent baby bumps beginning in the first trimester; others, like HGTV star Erin Napier, look unchanged even in the third. And if Joy-Anna did get pregnant in late May–i.e., after she and Austin were married–she’d be at the end of her second trimester now.

On the other hand, if she and Austin conceived just before their May 26 wedding, it would be functionally impossible for anyone to tell the difference. So Joy-Anna’s delivery date–and news of whether her baby is born prematurely–will be the thing that either stops all speculation or opens it all back up.

(Photo credits: Did Joy-Anna Duggar get pregnant before marriage via Instagram)