I recently did a profile on Fernanda, which was relatively easy thanks to the fact that she is the creator and co-owner of numerous successful businesses and projects – all of which are under the name Fernanda Rocha.

Peggy Tanous, on the other hand, was a whole different ballgame! Peggy married web designer and marketer Micah Tanous, 37, of Irvine, California on June 10, 2005 and there seems to be no mention of her maiden name anywhere on the internet. Consequently it has been nearly impossible to dig up enough information to justify a “profile” post measuring up to the high standards starcasm fans are accustomed to. Well, except for one thing, but more on that in a minute.

UPDATE – Fernanda Rocha has been written out of her official “Housewife” status in the current season. And we have since confirmed that Peggy Tanous is model Peggy Tyler (You can see a collection of her Bench Warmer pin-up trading cards HERE) and her real maiden name was Peggy Farney. 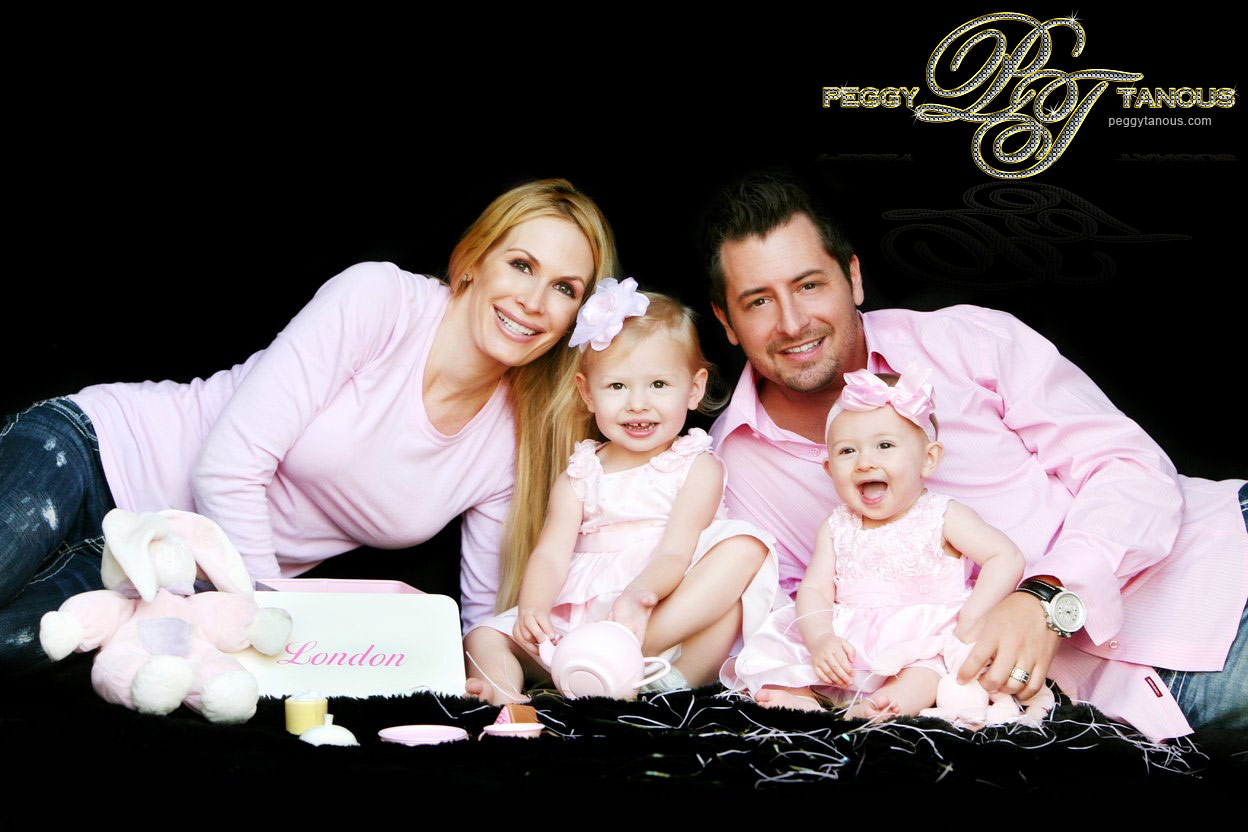 Peggy Tanous, Micah Tanous and their two daughters from PeggyTanous.com

Here’s what we know about Peggy Tanous. She’s a 41-year-old mother of at least two children, including a daughter with current husband Micah Tanous. Peggy and Micah are long-time friends of current Real Housewives of Orange County cast member Alexis Bellino and her husband Jim and were in attendance at a RHOC viewing party hosted by Alexis and Jim last November. Here is what they told the Orange County Register at the event:

“I’m very excited for her to take on this new challenge,” said Peggy Tanous, 37, of Irvine. She said she has been friends with the Bellinos for 15 years. “We all got married at the same time. Their twins were born the day after our daughter was born, in the same hospital. Alexis is real. If she doesn’t like you, she’ll let you know.”

Radar Online did a short article when it was first learned that Peggy would be joining the cast, and they said of the bombshell blond:

Peggy Tanous is a friend of current OC housewife Alexis Bellino, and insiders have told RadarOnline.com that she’s “truthful and blunt – who always tell it the way it is.”

That is pretty much all that there is to learn about Peggy Tanous! 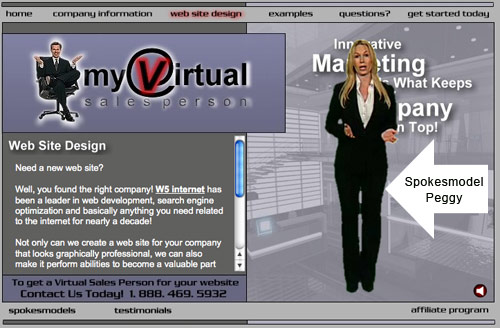 We did a post about Peggy a while back highlighting her spokesmodel work for her husband’s website www.myvirtualsalesperson.com which uses video recordings of “hosts” that play over top of the site. (CLICK HERE to see the post and watch Peggy at work!) The spokesmodel was simply described as “Peggy” and looked exactly like Peggy Tanous so we took a bit of a leap of faith by assuming it was Peggy Tanous.

But, one of the sites handled by My Virtual Salesperson is for model Peggy Tyler, who also looks exactly like Peggy Tanous and lists in her biography that she is “the official Spokesmodel for the hottest technology to hit the web www.myvirtualsalesperson.com.” At the time our “researchers” tried everything to find some concrete tie between Peggy Tanous and Peggy Tyler outside of the fact that they looked exactly alike and were connected to Micah Tanous’ web site, but couldn’t connect the dots. Here are a couple side-by-side photos of Peggy Tyler (R) from PeggyTyler.com and Peggy Tanous at her wedding in 2005 taken from MicahAndPeggy.com. (The ones from PeggyTyler.com have obviously been Photoshopped a bit to smooth them out, but you can still see the similarities in the facial features.) 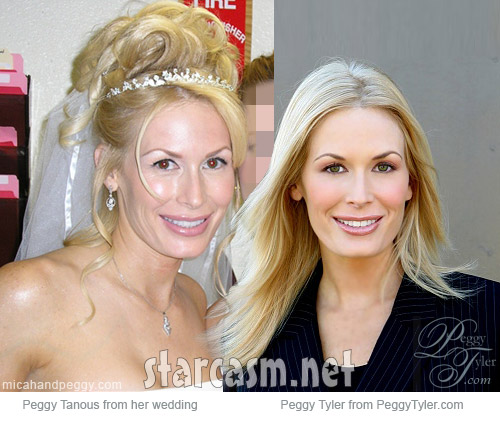 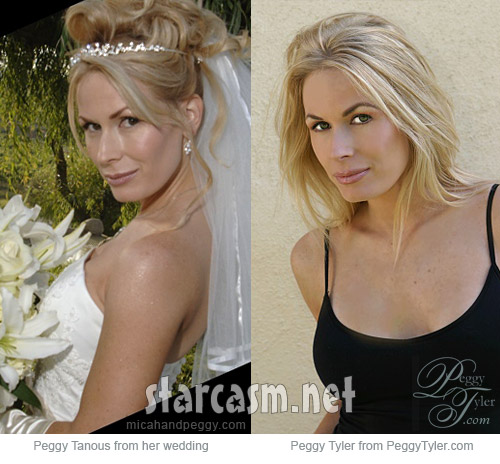 After trying to verify her identity through a couple modeling agencies I decided to put off further research for a while. Today I reopened the Peggy Files and wasted the better part of an entire day watching football and trying to find a smoking gun connecting the two Peggys.

Although I didn’t find the “smoking gun” I did find a couple warm butcher knives (sorry for the inappropriate metaphor stretching) which was enough in my mind to share it with the info-starved folks of the interwebs! Here are the three connections I was able to make.

3. Peggy Tyler has a photo of herself with a young boy (L) who was the ring bearer for Peggy and Micah Tanous’ wedding (R). On Peggy Tyler’s MySpace page the photo is captioned “me and my son Preston” but the file was named “Lpegjack.jpg” on PeggyTyler.com and she mentions in her bio that she is “the proud aunt of two adorable nephews, Jack and Quinn.” I’m leaning towards the nephew angle because there were two young boys in the service and there has been no mention of Peggy Tanous having more than the two young daughters in the photo near the top of this post. But, either way, the boy in the photo is definitely the handsome young man from the wedding ceremony: 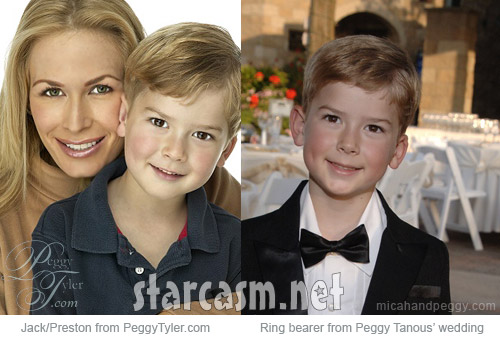 The Real Housewives of Orange County Season 6 premieres in January, 2011.

(Anyone out there friends of either Peggy willing to confirm or deny that they are one in the same? Send us an email at starcasmtips(at)yahoo.com or comment below!)

UPDATE – As I mentioned near the top of the post, it has been confirmed that Peggy Tanous is indeed Peggy Tyler! And before that her name was Peggy Farney! CLICK HERE to see the Peggy Tyler collection of Bench Warmer pin-up trading cards featuring P.T. in itty-bitty bikinis and lingerie!