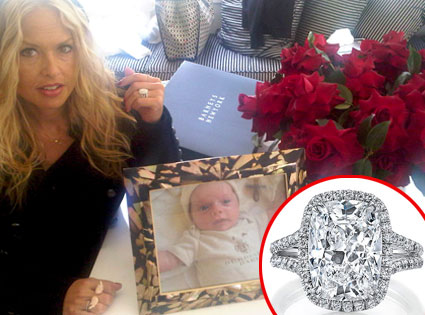 Not only did Rachel Zoe shrink down to a size -2 after she gave birth to the adorable Skylar Morrison Berman a little over than a month ago, she also scored a diamond bigger than her waist.

Jeweler Neil Lane spoke to People about the 10-carat diamond ring that was gifted to Zoe by her husband Rodger as a “push present.” Rachel was prominently wearing the cushion-cut luxurious jewelry in a picture she tweeted on Mothers day of her and picture of her son (who was stylishly sporting a Burberry onesie.)

Lane said of the gift: “Rodger wanted to surprise Rachel with something romantic — and huge. I knew she’s wanted a cushion cut forever. It was their first baby and she’s been working so hard that Rodger wanted to do something very special. Rachel was thrilled and hasn’t taken it off since!”

It’s a nice and extravagant gesture, but I’m wondering if there was somewhat of a publicity discount involved. Neil Lane is definitely never one to pass up a little PR, or energetically promotion. The jewelry designer’s company provides the luxurious engagements rings featured on every season of ABC’s The Bachelor and The Bachelorette.