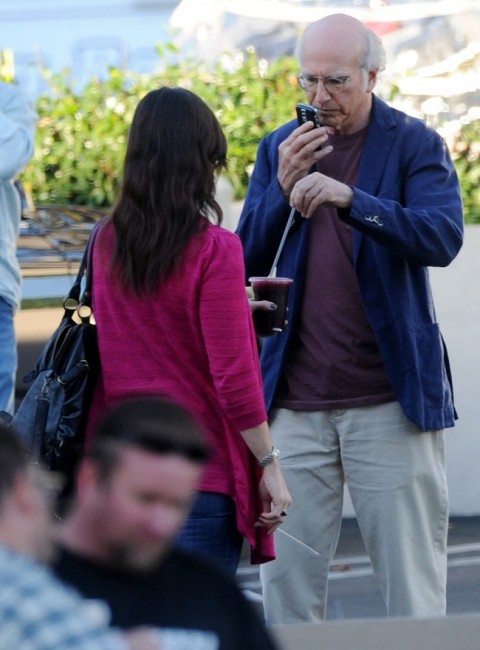 One of the finest comedic TV characters of the last 25 years is frighteningly not really a conjured up character at all.  The callous Larry David we all cringe at with one eye closed from his popular HBO show Curb Your Enthusiasm is the same Larry David folks encounter in real life.  This has been a subject covered a great deal when it came to many of the funniest scenes from Seinfeld written by David from personal experience but rarely has it been reflected so well in a real life photograph.

The photo above is of the “male pattern baldness king of awkward self inflicted bad situations” having an intern hold his fruity looking drink while he is having a conversation with someone via speakerphone on his cell!  Tell me that isn’t a scene straight from his show, or should I say his real life.  I can imagine the assistant later being the daughter of an important book reviewer who David wanted to impress for his memoirs.  The reviewer gets pissed and ends up in a yelling match with Larry and you have yourself the crux of another hilarious episode of Curb.

Furthermore, Larry took his time after securing his straw into his fruity cup to carry on his incredibly important conversation while Jeff Garlin, who plays his manager friend on the show, waited for him patiently.  I’m not making this stuff up here folks.  Just like Larry doesn’t make up half the stuff on Curb, he just adds a little extra from real life experiences and it works beautifully.

Here is Larry fessing up to often times being the character on his show.

“We do have these ridiculous social conventions that we all have to abide by all the time and they do get on my nerves and so often people think that the things I get angry about on the show don’t apply to real life.   People seem to think I don’t really care about that stuff.  That I’m just making it all up and that I like to do all that stuff and it’s not true.” – Larry David

There is a pretty young drink holding assistant who can attest to that being true.  Larry David can be one hilarious S.O.B..