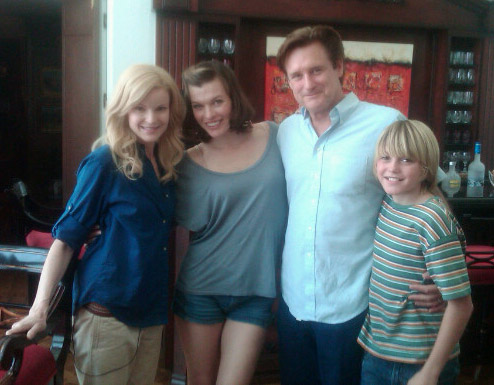 Could it be?!? Has one of Hollywood’s most famous and beautiful red-headed icons converted to a new hue?

Melrose Place and Desperate Housewives star Marcia Cross can be seen in this photo from the set of her latest movie project Bringing Up Bobby sporting blond locks! It was tweeted by costar Milla Jovovich (standing next to Marcia) with the caption:

“Hey!Finally 1 pic from set! Marcia Cross, me, Bill Pullman and Spencer List hving a grt lunch on our last day!”

For devout Cross fans this marks the second “red is dead” scare after Marcia was photographed in 2008 with a short, brunette wig.

Relax Marcia fans – there is no need to fear. Though her hair history reads like a tub of Neapolitan ice cream, the crimson-crowned Cross is still the Red Queen underneath! The lighter locks are reportedly just another wig.

Here’s our scrumptious scarlet-scalped Marcia in her natural form with a bit of appropriate theme music from Bruce Springsteen:

Bringing Up Bobby is the story of a European con-artist and her son Bobby, who find themselves in Oklahoma in an effort to escape her past and build a better future. Olive and Bobby blithely charm their way from one adventure to another until Olive’s criminal past catches up with her. Consequently, she must make a choice: continue with a life of crime or leave the person she loves most in an effort to give Bobby a proper chance in life.

Marcia Cross puts on her victory face after camera-blocking Speidi