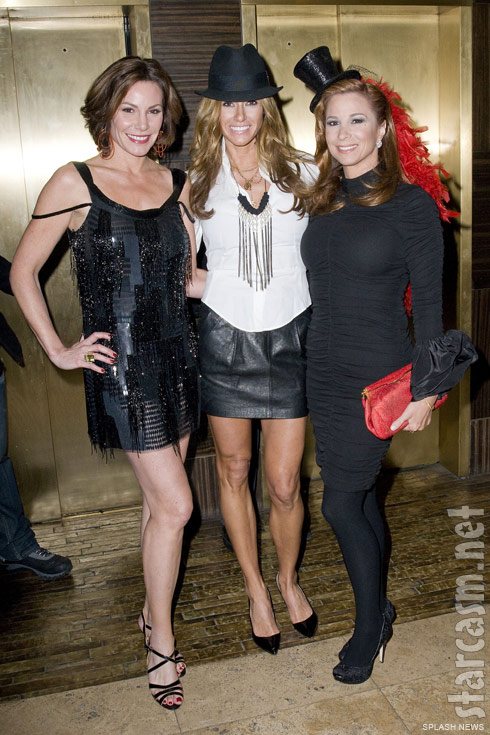 This week’s episode of The Real Housewives of New York City featured a burlesque-themed party thrown by the undergarment averse (and financially troubled) Sonja Morgan, and the rest of the cast showed their support by attending in a variety of costumes ranging from risque to mundane.

You can sort of measure just how “Team Sonja” each cast member is by just how risque they dressed for the affair. Alex McCord and Simon Van Kempen are obviously big fans of Sonja as are the hilariously attired Ramona Singer and Mario Singer.

In stark contrast the other four ladies were a few steps shy of racy – which seems to line up perfectly with their opinion of Sonja this season. In the photo above we have Countess LuAnn de Lesseps making a valiant effort (perhaps etiquette demanded something at least flashy) but Kelly Bensimon and Jill Zarin were a bit more reluctant as they interpreted Sonja’s Burlesque theme to mean wear black and white with a hat and maybe some feathers. (Which doesn’t mean they don’t look good – just not quite “burlesque.”) And Cindy Barshop was similar with her black leather shorts and matching thigh-high boots.

Never one to be shown up, Sonja took on the challenge of sucking at burlesque and knocked the ball out of the park with her on-stage recitation of an uncomfortably-not-subtle poem aimed at her housewife adversaries – all while once again managing to share her derriere with viewers at home:

After the episode was all said and done I was surprised to find that I have a brand new, completely unexpected favorite housewife of New York City! That’s right, it’s puppy-staring Snidely Whiplash himself, Mario Singer! LOVE that guy! 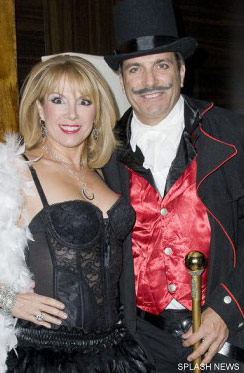 (Click photo for a larger image and more of Ramona.)