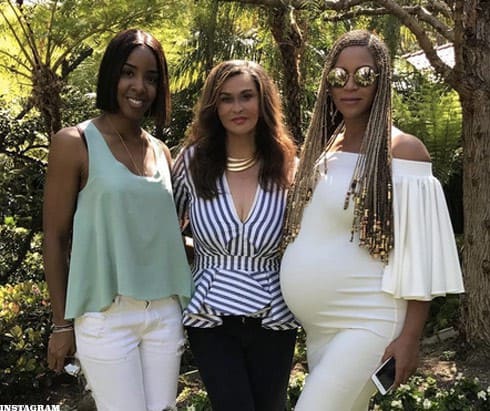 Tina shared some snaps from the extravaganza to Instagram, including a great pic of herself between her famous daughter and Rowland. She captioned the image ” 3/4th of my girls❤️ Missing 1/4 at Coachella? “ (Daughter Solange who was attending the music festival.)

Speaking of Coachella, Beyoncé was set to headline this year, but backed out on the advice of her doctors.

The “Crazy in Love” singer nearly broke Twitter in February when she announced that she and husband Jay Z were expecting twins.

Tina Knowles also shared a video snippet in which you can briefly see Bey and Jay Z just hanging out:

Rumor has is that the new additions are expected sometime in June.

Beyonce’s dad Mathew Knowles opens up about their falling out