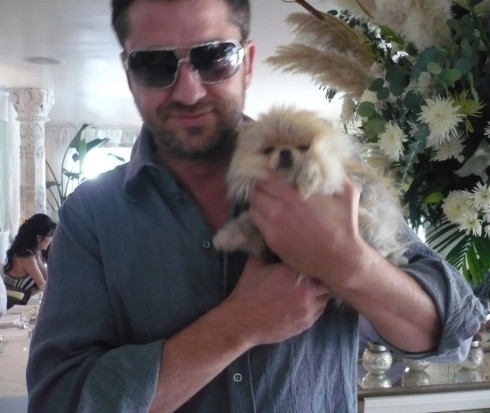 When Gerard Butler replied, “Who’s Brandi Glanville?” when asked about the alleged week-long tryst the reality star claimed to have had with the actor I assumed things would calm down on the Butler did it, Beverly Hills Housewives cast member rumor mill. Twitter-turns out I was doggone wrong.

It looks like one of Brandi’s co-stars not only has her back but also claims to have slept with the A-List actor. So who went there? Who had the pomp and stance to fuel this fire? It was none other than Giggy the Pom, Lisa Vanderpump’s too-fab-for-you Pomeranian!

Here was Giggy’s tweet that included the above photographic evidence that the two did get very close and personal:

The photo has appeared previously as part of the promotion of Giggy’s arm candy owner Lisa Vanderpump’s restaurant Villa Blanca.

As for Brandi, it appeared at first as if she was going to take the high road after receiving the who-dat? diss but in the end she just couldn’t help herself. She told RumorFix:

“He called me last night and told me he said it, He is upset because he is a private person. I don’t lie, so I don’t really care.”

The balls are in your court now Mr. Butler. What say you of the above photo and Giggy’s gettin’ Giggy with it Twitter bomb?

The Brandi Glanville and LeAnn Rimes feud: A timeline