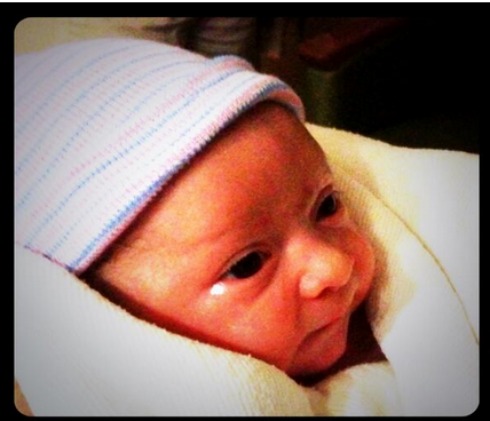 She may be one week old, but little Harper Estelle Wolfeld Gosk already has more than 4,000 followers on her Twitter account, @HarperEstelle. Granted, she’s not the one typing the messages.

“I just felt like opening a Twitter account for her would give her a little voice in the loud world of social media,” Harper’s mother Jenna Wolfe told Today, which she works for as an anchor/correspondent. “Didn’t know if anyone would follow her tweets, but I figured she’d have at least two loyal followers — her mother and me. Turns out, she’s pretty funny. Guess it was all that amniotic fluid.”

Harper’s inaugural tweet was an appropriate comic of a technologically forward baby was sending out a text message. Since then, lil’ Harper has commented on her first trip to the doctor and the stinky diapers she creates for her moms. 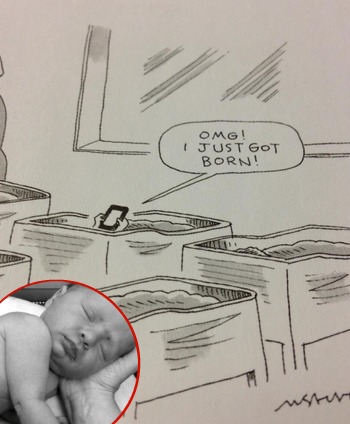 Jenna said she got the idea during her pregnancy when she would make up voices for her baby with NBC’s Stephanie Gosk. Now that Harper’s here, Jenna said she hopes the little girl can take it over one day.

“She’ll have that account up and running until she’s old enough to do it herself,” Jenna said. “It will be a humorous approach to life, advice for moms (‘I think 50 iPhone pictures of my face is enough for one day’), keen observations (‘What’s the deal with my belly button?’), and general thoughts and questions (‘Why do you two ladies spend so much time grocery shopping when breast milk is so good?!’)”

There’s nothing too controversial or groundbreaking about new parents providing humorous updates from a baby’s life — and Harper’s quickly growing number of followers proves many people are interested in reading what “she” has to say. However, some others argue Harper should be allowed to find her own voice in her own time rather than have one imposed on her at such a young age.

We’re interested in your thoughts: Are Twitter accounts for babies just in good fun or potentially detrimental?