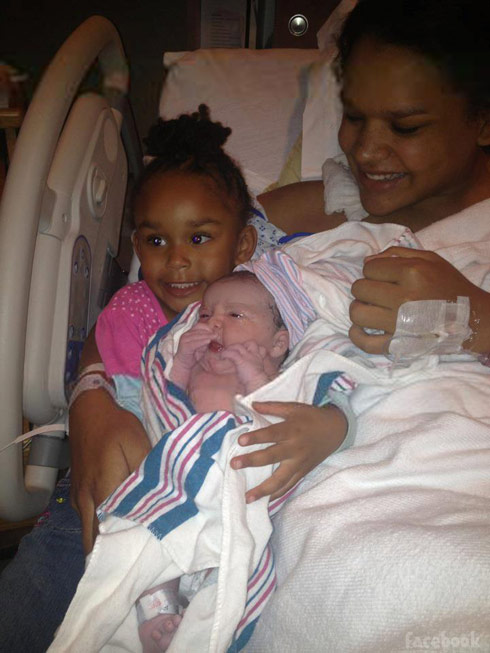 16 and Pregnant Season 1 cast members Ebony Jackson-Rendon and Joshua Rendon have given birth to their second daughter! Jayda Jewell Rendon was born Monday, October 15 after labor was induced at an Arkansas hospital on Monday. Jayda joins older sister Jocelyn, seen in the photo above with mom.

Ebony and Josh have had a rough couple of years, to say the least. In May of 2011 Ebony suffered an ectopic pregnancy, resulting in the loss of their baby. Then, in September, she and Josh made headlines when they were arrested and daughter Jocelyn was taken from them after Child Protective Services found their home to be untenable.

The extent of the “untenableness” was revealed to the public shortly after when Jacksonville, Arkansas police released photos of the inside of their home which showed “human and dog feces on the floor, walls, and clothing.” Also found on the premises was drug paraphernalia and a gram of synthetic marijuana. Josh and Ebony were charged with possession of drug paraphernalia, possession of a controlled substance (synthetic marijuana), and maintaining a drug premise in addition to endangering the welfare of a minor.

As of April 9 of this year, when it was first announced Ebony was expecting again, Jocelyn was still with Child Protective Service. According to The Girls From 16 and Pregnant Facebook page, Ebony and Josh “have her back and are doing awesome!”

Is Drew Barrymore having a girl or boy? She says…