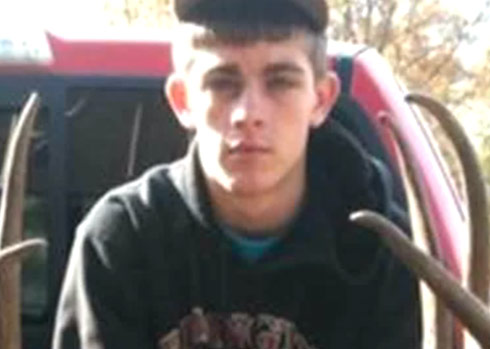 18-year-old Caisen Green of Tahlequah, Oklahoma (above) posted a gruesome image of a pit bull he shot and killed with an arrow to Facebook with the caption:

“For all you Pit lovers out there. Here’s what happens when one shows up around my house.”

The image sparked immediate outrage and went viral. Green and his family started receiving death threats and the young man is said to have moved out of town for fear of his safety. Green deleted the image and his account but it was shared so often it will now forever be a part of the internet landscape. Many initially questioned the authenticity of the photograph but the young man’s father has since acknowledged that the shooting took place.

Here is the original message posted by Caisen with the startling image of the slain pit bull trimmed off. (if you’re inclined to see the picture as initially posted, you can view that here). 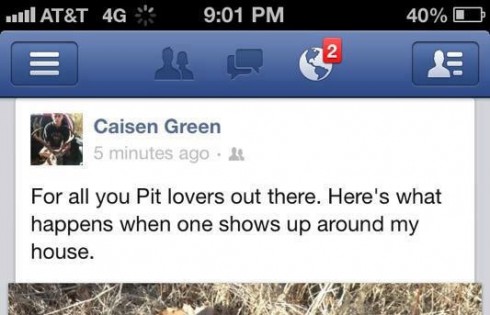 Once the image began circulating concerned folks flooded the Cherokee County Sheriff’s office with demands of justice, as calls came in “from around the world.” Cherokee County Undersheriff J.C. Chennault has stated that the event is under investigation.

“One of the patrol deputies called me and wanted me to know about it. I met him at the sheriff’s office and he showed me the picture… It’s a gray area. If the dog is threatening livestock or your well-being, you can do what you have to do stop it. I’m going to do my best to get everything done this week.”

Chennault is also requesting that the death threats stop, adding that those guilty of such actions could later face prosecution.

“There’s a possibility someone could be prosecuted for making threats, definitely. I understand people being passionate about an animal’s safety and well-being, but it can’t come at the expense of a human being.”

Green has hired an attorney and was supposed to meet with Chennault today. The Undersheriff is gathering up evidence and facts regarding the shooting of the pit bull and will be handing this information over to the District Attorney who will decide whether or not to prosecute.

If the D.A. moves forward, Green could be charged with felony animal cruelty.

Green’s father stated that his son shot the dog in question as a means of protecting his younger siblings.