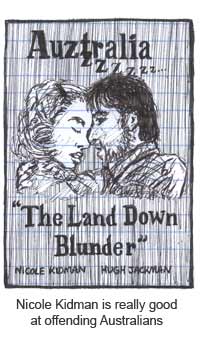 As if disappointing the non-native populace of Australia with a terribly mediocre epic motion picture about their history wasn’t bad enough, Nicole Kidman has found a way to rile up Aborigines as well. Kidman and co-star Hugh Jackman were promoting the movie “Australia” on a German television show (I guess they figure any country that loves pretty-but-boring David Hasselhoff might like a pretty-but-boring movie as well) and Nicole attempted to play a didgeridoo, a traditional Aboriginal instrument. Aborigines forbid the playing of a didgeridoo by women because it will leave them barren.

OK. That’s how we might have written that story normally. But, we have a super rare opportunity here! How often do we get to write a story that features the didgeridoo?!?? Answer: Once every ten years at best. So here is the story didger-rewritten in honor of this special occasion:

“Australia” star Nicole Kidman blew a didgeridoo on German television, making members of the Aboriginal tribe vegemightily angry! It seems that didgeridooing is a dodgeridon’t for females because playing the instrument is believed to make women barren. Nicole Kidgeridoo was with co-star Didgerihugh Jackman on German Television promoting their epic snorefest “Auzzzzztralia: Far And Away Down Under” when she weakly attempted to play the traditional instrument. (Apparently “Australia” blows way harder than Nicole) There is no word if there is a way for her to didgerundo what she has didgeridone, or if she is didgeridoomed to have no more children to give unfortunate names to.

For Nicole, offending the Aboridgeridoos and filming “Australia: The Land Down Blunder” are just the latest in a string of mistakes that include her marriageridoos to didgeridouche Krikeith Urban and Scientolidgeridude Tom Cruise. In honor of these mistakes, we offer the Top Five Worst Things Nicole Kidman Has Blown:

5. A Didgeridoo
4. A chance to make a great movie about the little known history of Australia
3. Naming her child
2. Keith Urban
1. Tom Cruise

(What do you call Tom Cruise and Nicole Kidman having sex? A shrimp on the barbie doll. Heh heh! Just made that up!)

Since there is no guarantee starcasm will even be around in ten years when the next celebrity story involving a didgeridoo surfaces, here are the top five didgeridoo references we didn’t get to use this time around and the celebrity they are best suited for:

Are Nicole Kidman and Reese Witherspoon friends in real life?