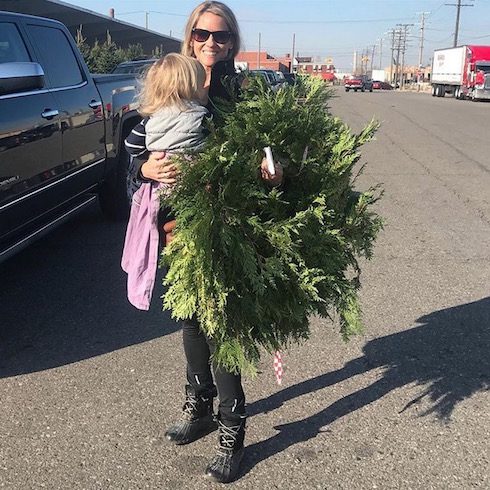 As Rehab Addict‘s Nicole Curtis’ tumultuous 2017 comes to a close, it seems the custody battle between herself and the father of her youngest son will continue indefnitely. Two years after Nicole Curtis’ baby’s father Shane Maguire asserted his parental rights and the courtroom drama began, things between Shane and Nicole are “still not perfect or even close.”

As we recently wrote, Nicole did confirm that she and Shane are “working on it.” But that update came before Shane filed a formal petition asking the court for more time with Harper — something that didn’t sit well with Nicole, whose belief in breastfeeding until the child is ready to stop has been well-documented.

Furthermore, a recent People feature explained that Nicole is also “an advocate for attachment parenting, a philosophy that promotes the bond of the primary caregiver and infant through extreme responsiveness and physical closeness.” This helps explain the melancholy social media update Nicole offered last weekend, in which she talked about suffering an anxiety attack stemming from Harper’s weekend away:

The circle of happiness behind me. 7 moms and I hiked into the woods for a few hours with our littles. I had a pretty intense anxiety attack a few hours earlier-the stress of separation and custody battles around holidays is excruciating and painful. This is a weekend away from my little one (just started a few hours ago) , it's never going to be something I get used to:(I have found a few wonderful mom groups and they save the mommy in me. Glorious, unplugged day of just celebrating the first snow fall, sunshine, love and my little nestled up right to me. Remember at this crazy time of year, you can say No, you can checkout and truth to be told, our littles just want us for Christmas. Toys will be forgotten, but special one-on-one time will be imprinted forever. #momtribe. And moms don't let anyone tell you their life is perfect ….it's a lie 🙂 we need to be honest with each other and support one another 🙂

Additionally, it’s believed that Shane’s use of social media to share several photos and videos of he and Nicole Curtis’ baby — from the period spanning just after Shane received visitation rights to earlier this year — may have exacerbated the tension between Harper’s parents.

(Nicole’s protection of Harper’s privacy is legendary: she didn’t even publicly acknowledge she was pregnant until after Harper had been born, and refused to show his face on social media for months afterward. In fact, Nicole Curtis’ baby didn’t make a public appearance with his mother until the infamous breastfeeding interview in early 2017. Since then, Nicole has teased Harper’s face in several social media posts, but never shown it unguarded.)

On a happier note, Nicole is once again repping for the annual Christmas Wishes fundraising drive. If you’re a fan of her “Old People / Old Houses / Old Dogs” T-shirt, or have been meaning to pick up a copy of her autobiography Better Than New, you can purchase both now and know that 100% of the cost will go toward providing for the needy:

You can visit Nicole’s official shop by clicking here.