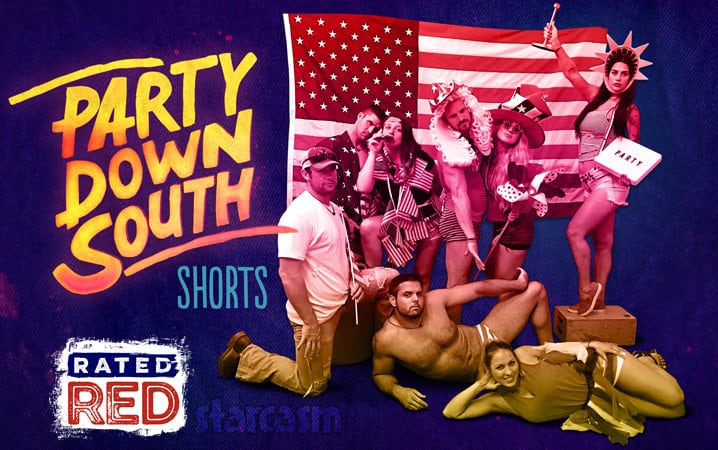 In a HUGE surprise announcement, cast members of CMT’s Party Down South and Party Down South 2 will be united for a brand new season via Rated Red starting July 11 — as in TOMORROW! The abruptness of the announcement combined with the unconventional format left many fans confused, so we tracked down the scoop from the production company with all the information on the new season and how you can watch it.

According to 495 Productions, the new season is titled Party Down South (Shorts) and will feature 36 10-minute episodes, or “shorts.” As already mentioned, the cast is comprised of members of the first two incarnations of the show. Here is a complete list of the cast:

The new series is set in St. Petersberg, Florida. Here’s the scoop on what viewers can expect to see this season:

PARTY DOWN SOUTH (Shorts) brings together eight, fan-favorite cast members who are let loose on St. Petersberg, FL. Every situation that this group finds themselves in goes sideways – in a hilarious (and country) way. Whether they are scaring the crap out of each other, washing cars for extra cash, bull-riding, or creating a makeshift waterpark in their backyard…it’s always a party with this bunch. Time together is never short of laughs, getting down and dirty in the mud, cookouts, pranks, the endless search for love, and blowing things up. Naturally when they are together it is always hilarious hijinks with just the right amount of drama.

And OF COURSE there is a CUH-RAYZAY preview trailer with LOTS of boobs, booze, butts, babes, and bros — oh, and completely uncensored profanity! Good ol’ internet…

In addition to being available to watch on RatedRed.com on July 11, 2018 at 3:00am ET/12:00am PT, all the episodes will also be available via the Rated Red app and Apple TV/Roku:

1. Online at https://t.co/b7izysnOnw
2. Via the Rated Red mobile app
3. Through the app on your Apple TV/Roku
(Will not air on television)

The only folks more pumped about the surprise announcement than the Party Down South fans are the cast! Here are some of their reactions from social media:

We made this new show solely for the fans! You guys have continued to show us love even after we went off the air. So we wanted to show our love right back! You’re going to LOVE it! @realratedred @sallyannsalsano @495Prods #PARTYDOWNSOUTH

Tweet at all your #PARTYDOWNSOUTH friends and family! I want everyone to be able to access this content if they want to see it! Message me if you have any questions and I’ll find out the answers for you! @realratedred @495Prods pic.twitter.com/gRQvxdSJUl

Who’s ready to see the #kardiac back in full swing? Well tomorrow, your dreams will come true! Check out #realratedred and you will see the og’s and the newbies come together for an awesome show!! @realratedred @495productions @sallyannsalsano #partydownsouth

Congratulations to the cast and to the production company for finding a way to keep #PDS alive and available to viewers — and kudos to everyone involved for somehow keeping it a secret for so long!