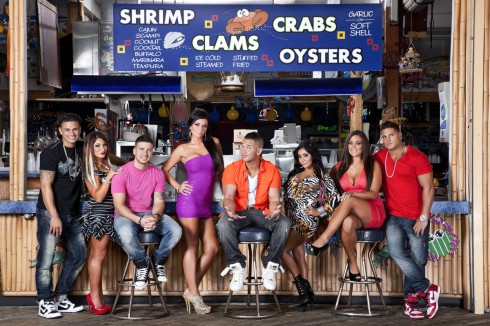 It’s official — the sixth and final season of Jersey Shore has a premiere date! David Janollari, Head of MTV Programming, made the announcement during the network’s presentation at the Summer 2012 Television Critics Association Press Tour earlier today. So when does Jersey Shore Season 6 premiere? Thursday, October 4 at 10PM! Jerzdays are back!

Janollari also officially announced Snooki & JWoww would be returning for a second season (something we revealed more than a week ago) as well as Money For Strangers. Not on the list of shows coming back for a sophomore season was Jersey Shore spin-off The Pauly D Project.

Here is the 411 from the official MTV press release:

“Snooki & JWOWW” and “Money From Strangers” Renewed for Second Seasons

BEVERLY HILLS, CA (August 3, 2012) The much-anticipated premiere date for season six of “Jersey Shore,” along with the premiere dates for new and returning series, and season two renewals for “Snooki & JWOWW” and “Money From Strangers,” were among the announcements today by David Janollari, Head of MTV Programming, during the network’s presentation at the Summer 2012 Television Critics Association Press Tour. MTV also unveiled an all-new clip from the upcoming comedy “The Inbetweeners,” set to debut on Monday, August 20 at 10:30 p.m. ET/PT, check it out HERE.

“MTV has been a beacon for each young generation throughout its history, and this Millennial generation is no different. Our distinctive blend of reality and scripted shows gives voice to the excitement and possibilities that frame their everyday lives,” said Janollari. “We strive to reflect their hopes, dreams and struggles, with a mix of humor, authentic voices and engaging stories that you can’t find anywhere else on TV.”

“Whether it’s the outrageous and ever-evolving characters on ‘Jersey Shore,’ the comedic antics of ‘Snooki & JWoww,’ or the emotional and surprising relationship revelations on our new series ‘Catfish,’ we strive to provide our audience with a diverse slate of innovative programming that provokes and entertains in unexpected ways,” added Chris Linn, EVP of Programming and Head of Production, MTV.

MTV claims six of the top fifteen cable series this year among P12-34, tripling the amount of its nearest competitor. Reality series are incredibly strong, with the network boasting five of the top ten cable reality series so far this year, with “Jersey Shore” ruling at #1, followed by “Teen Mom 2,” “Teen Mom,” “Snooki & JWOWW,” and “The Challenge.” On the scripted front, “Teen Wolf” and “Awkward” rank among the top ten scripted series across cable.

“Jersdays” are back with the premiere of season six of “Jersey Shore” on Thursday, October 4 at 10:00 p.m. ET/PT. The new scripted comedic drama series “Underemployed” from Emmy-nominated creator Craig Wright will debut on Tuesday, October 16 at 10:00 p.m. ET/PT. New docu-series “Catfish: The TV Show,” based on the critically-acclaimed Sundance film, will premiere on Monday, November 12 at 10:00 p.m., followed by the return of “World of Jenks” at 11:00 p.m., featuring Andrew Jenks, the documentarian of his generation.

In addition, the network announced season two pick-ups for TV’s zaniest BFF’s, “Snooki and JWOWW,” who will continue to try to live their lives to the fullest while balancing adulthood and the unexpected surprise of parenthood, as well as “Money From Strangers,” which features host Jeff Dye, bringing even more hidden camera hijinks and comedy back for a second season.