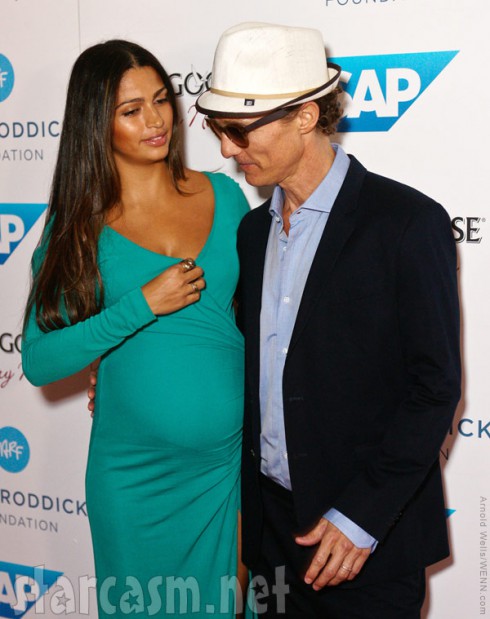 Matthew McConaughey and his wife Camila Alves welcomed their third child today in Austin, Texas. And no, this is not a baby prank. Matthew had initially announced the pregnancy in July telling fans, “Happy birthday America, more good news, Camila and I are expecting our 3rd child.” The couple is already parents to son Levi, 4, and daughter Vida, 2.

According to TMZ, Matthew was with Camila in Austin when she gave birth to what they claim was a baby girl, although it has yet to be confirmed. Sources at the hospital say Matthew was absolutely ecstatic and even looked to have put on a bit of weight since losing nearly 40 pounds for the upcoming flick, The Dallas Buyer’s Club.

UPDATE – Matthew McConaughey has revealed the latest addition to the McConaughey clan is actually a little boy! From Whosay:

December 29, 2012 Camila (@iamcamilaalves) gave birth to our third child yesterday morning. Our son, Livingston Alves McConaughey was born at 7:43am on 12.28.12. He greeted the world at 9lbs. and 21 inches. Bless up and thank you for your well wishes. Happy New year, and just keep livin, Camila and Matthew McConaughey.

Matthew and Brazilian host/designer Camila first met back in 2006. Two years, later, they welcomed their first child, and two years after that, the welcomed their second. Then, on Christmas Day of 2011, the couple became engaged and went on to wed in Austin on June 9, 2012. In the wedding, Levi was the ring-bearer and Vida was the flower girl.

Throughout her pregnancy, Camila has remained fashionable and was never afraid to show a little skin. “Do not be afraid to be sexy while you’re pregnant,” the former model recently told Us Weekly. “I’m learning that on my third pregnancy. I’m like, ‘oh wow, you don’t have to wear just flowing things.'”