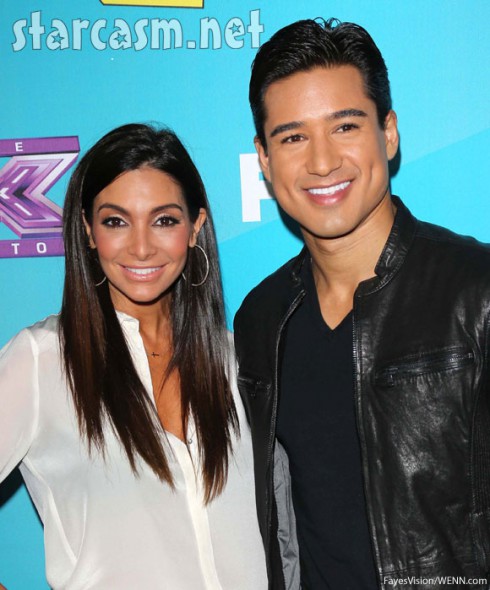 Mario Lopez and Courtney Mazza are expecting their second child together. Just two months after tying the knot, the X-Factor host and his wife have confirmed that they will be giving their two-year-old daughter Gia Francesca a sibling. In fact, they let her announce the news earlier today.

During a taping of Extra (which Mario also hosts), little Gia appeared on camera wearing a “Big Sister Gia” t-shirt. Then, Mario gushed away about his exciting news. “I am the happiest father in the world,” Mario said. “We cannot wait to welcome baby Lopez number two into our lives.”

“I’m due around Gia’s birthday [September 11],” Courtney then revealed to Us Weekly. “I’m in that stage where I can’t fit into my regular clothes anymore but I can’t fit into maternity clothes yet either. But I’m good, it’s all good!”

As for her pregnancy cravings, Courtney says Cap’n Crunch is at the very top of her list, but this fit mommy isn’t indulging herself too much. “Right now, I’m really craving Cap’n Crunch cereal! But I try to keep it in moderation and not go too overboard,” she says.

Gia is sure to be thrilled with a new little baby, but so far, she doesn’t seem to quite understand what exactly is going on. “She points at Courtney’s belly and says, ‘Baby baby,” Courtney explains. “Once mama really starts popping out I think she’ll understand more . . . I can’t wait to expand the Lopez family!”

And so is Mario. He exclaims, “I’m just so excited I can’t take it!”

UPDATE – Here’s a video clip of the announcement from Extra!

REPORT Jeremy Renner to be a dad, ex-girlfriend expecting next month