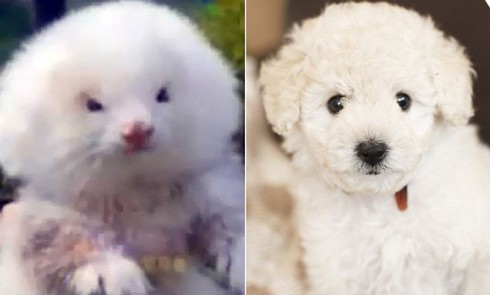 I’m sorry, but have some people never seen dogs before? The frizzy, whiskered animal pictured on the left side of the top picture is clearly not a toy poodle. Yet, a number of people were conned into buying the “puppies” at a bazaar in South America… Only to learn their new pets were oversized ferrets an unethical dealer pumped with steroids.

According to a June 2012 report from Buenos Aires, a retired man bought the animals for $150 each at La Salada, the largest market in Argentina.

When the new owner took the dogs to the veterinarian, he was shocked to learn the animals weren’t even in the canine species. According to The Daily Mail, which translated the Spanish news video, the animals were ferrets on steroids. The weasels were even groomed to be fluffier, similar to a toy poodle.

Although the poor owner likely felt embarrassed by the situation, he reportedly isn’t the only one unable to distinguish a dog for a ferret. Another woman interviewed in the video claimed she bought a “chihuahua” at La Salada. (I bet that one didn’t have the same fluffy hair.)

This story certainly makes you scratch your head and wonder two things: First, how could people be tricked? Second, why would someone pull such a ridiculous scam?

In regards to the first, people are willing to stretch their imagination for a good deal. Real toy poodles can cost more than $1,000, so the South American buyers thought they were getting a bargain.

As for the salespeople, The Daily Mail reports the majority of workers at the Argentinian market are poor Bolivian immigrants. If they are able to sell a cheap “Brazilian Rat” for $150, they are better able to feed and shelter their families.

Here’s a video report, although not in English: