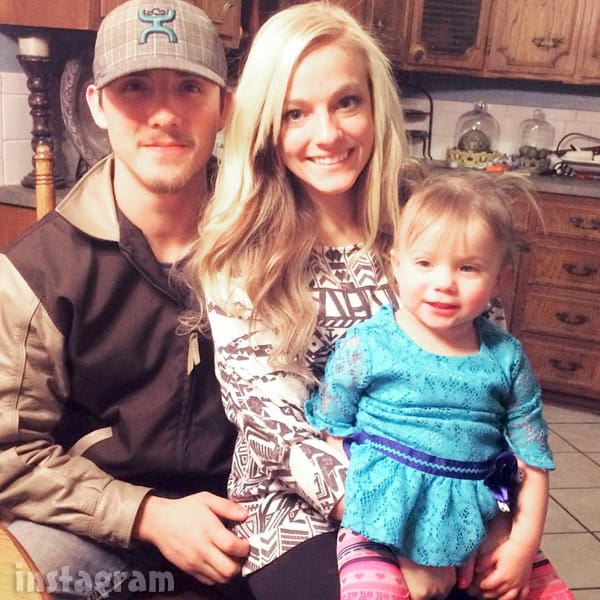 It was revealed last month that former Teen Mom 3 star Mackenzie McKee is currently pregnant with her third child, and that the pregnancy came at a terrible time as she and husband Josh McKee were reportedly splitting up. As it turns out, Mackenzie McKee really is pregnant, but she and Josh are not only still together but better than ever!

Although Mackenzie hasn’t been sharing many pregnancy updates on her personal social media accounts, she has been funneling LOTS of info through this sanctioned Facebook fan page — including numerous photos, as well as updates about her health, her due date, the sex of the baby, and her relationship with Josh.

According to the page, Mackenzie is pregnant with a little boy and is due September 7, but there are already plans to do a C-section in August. Check out this photo of pregnant Mackenzie showing off her six-month baby bump last week:

Here’s what Mackenzie wrote along with the photo:

O hi you all, I’m just strong, fat, and healthy… Lol this has for sure been my easiest pregnancy. I’m pulling into my six month with gaining 6 pounds total and feeling like I could walk across stage tomorrow performing a tumbling routine ?.. I for sure give all the credit to Kyani. I think keeping my body balanced and where it needs to be is why I am literally half the size I was with my other two.

I will be traveling and still speaking throughout the summer, have baby M in August, and start training for show #3 ???… We are excited to complete our family and YES permanent decisions will be made on both ends. God had a plan for our family and everyday I wake up feeling blessed that I am able to stay home and work a million dollar business through an app on my phone? and guess what my favorite part about this pregnancy is “I GET TO STAY HOME AND NURSE AS LONG AS I WANT” I love nursing, and the bonding experience it brings is beyond words. And I don’t have to cut hours from work, pump while I’m at work and baby is at daycare, or give daycare half the money I work for.

And Mackenzie isn’t the only Douthit (her maiden name) currently expecting! Her sister Whitney is also pregnant, with both expected to deliver in September:

Apparently there is this rumor going around about Kenzie & Josh’s marriage being rocky. This rumor is NOT TRUE!!! As one who sees the two of them together very often, I can confirm that they are happier now, than they ever have been, and they are both beyond happy to be adding this new addition to their little family.

For those familiar with Mackenzie, you know that being pregnant is a much bigger deal for her health-wise than most because of her type 1 diabetes. Although Mackenzie had one of her biggest diabetes-related health scares of her life back in January, it appears as though she has had no complications during this pregnancy. From the Facebook page admin:

Great, great, and GREAT! We’re lovin’ all the good news and can’t wait to meet Gannon and Jaxie’s little brother later this year!