As I mentioned in a previous post, American Horror Story co-creator Ryan Murphy revealed that last night’s episode of Coven titled “Protect the Coven” was going to contain some clues as to what the fourth season of AHS would be about. So, I paid special close attention to the episode looking for clues and have compiled a list of the things that jumped out at me as serious possibilities.

In case you missed it, so far Ryan Murphy has revealed the new season will be filmed in either New Orleans or Santa Fe, will take place in 1950, and Jessica Lange is working on a German accent for her part.

So, here’s the list. (Please know that this post contains a SERIOUS amount of AHS geeky obsessionalism!) 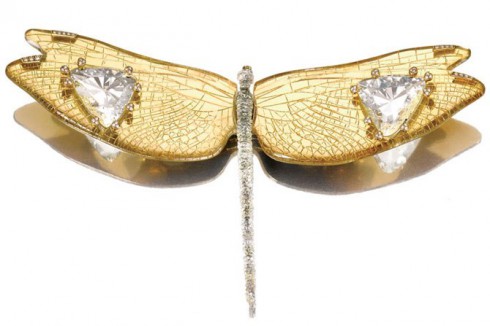 • When Myrtle talks with Zoe about leaving the coven she gives her a sapphire and topaz harvester ant made by jeweler Joel Arthur Rosenthal. Rosenthal, who is more commonly referred to by his initials JAR, is a reclusive modern jeweler whose pieces are highly sought after and command prices in the hundreds of thousands of dollars at auction. (The harvester ant Myrtle mentions I believe is the Maricopa harvester ant, Pogonomyrmex maricopa, which is thought to be the most venomous insect in the world.) Although I couldn’t find any ants made by Rosenthal, he does make a lot of insect pieces, including the dragonfly above. Myrtle refers to JAR as “the Fabergé of our time,” which was a description famously first used by fashion icon Diane von Furstenberg to describe Rosenthal.

• Speaking of Diane von Furstenberg, Myrtle goes on to reveal that she was actually in love with Egon von Fürstenberg, but he broke up with her and instead went on to marry Diane. Myrtle suggests the marriage (and Egon’s financial backing) was what would eventually lead to the greatest invention of our time, the wrap dress.

Egon von Fürstenberg and Diane von Fürstenberg (both born in 1946) are too young to figure into a storyline taking place in 1950, though it is possible that they would be featured as children. So perhaps it is either Diane or Egon’s parents? Here is information on both from Wikipedia:

Diane Simone Michelle Halfin (later von Fürstenberg) was born in Brussels, Belgium to Jewish parents. Her father was Romanian-born Leon (Lipa) Halfin, who immigrated to Belgium from Chişinău (then Bessarabia province of Romania and now the capital of Moldova) in 1929. Her mother was Greek-born Liliane Nahmias, a Holocaust survivor. Just 18 months before Diane was born, her mother was in the Auschwitz concentration camp.

The House of Fürstenberg is an ancient German family which reigned over a small principality within the Holy Roman Empire until mediatized in 1806, henceforth retaining their official princely status until the fall of the German Empire, in 1918 and thereafter maintaining aristocratic eminence through continued ownership of vast estates. Although zu rather than von is the predicate attached to the family’s princely title (denoting that the family retained possession of, not merely past or nominal association with—the Fürstenberg family seat), Egon and his sister chose to use the more familiar von for career purposes.

His sister is the actress and socialite Princess Ira von Fürstenberg, whose first husband, Prince Alfonso of Hohenlohe-Langenburg, was founder of the Marbella Club Hotel. His former wife is the fashion designer Diane von Fürstenberg. He also has a younger brother, Prince Sebastian. He was first cousin of Minister of Foreign Affairs of the Czech Republic Karel Schwarzenberg.

Egon’s branch of the family descends from both Stéphanie de Beauharnais and the 18th-century English eccentric William Thomas Beckford.

There’s certainly a lot there to work with, with any number of reasons for Jessica Lange to be learning a German accent! 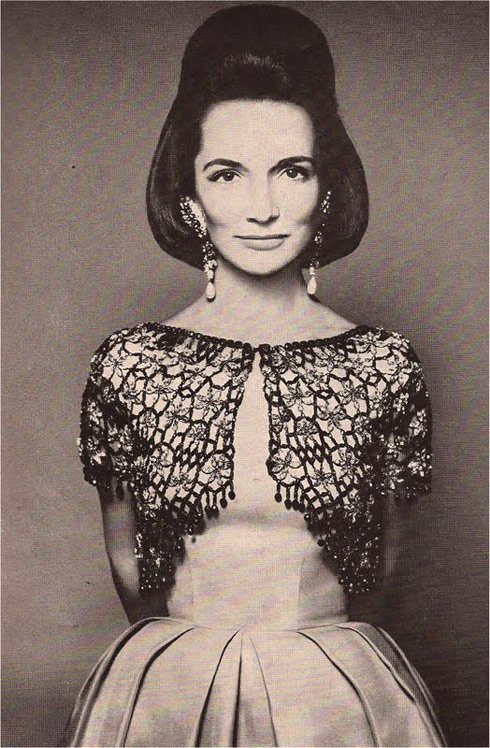 • When Myrtle laughs off Zoe’s notion that she might actually wear the jewelry crafted by Joel Arthur Rosenthal, she adds that only Lee Radziwill (photo above) or herself could pull it off. Just in case that quick bit of name dropping had significance, here’s the 411 on Lee Radziwill:

Caroline Lee Bouvier (born March 3, 1933), is an American socialite, public relations executive, interior decorator, and former actress. She is the younger sister of the late First Lady, Jacqueline Kennedy Onassis, and sister-in-law of President John F. Kennedy. Her niece Caroline Bouvier Kennedy is named after her. She was named to the International Best Dressed List Hall of Fame in 1996.

Caroline (who would later go by Lee) would eventually marry three times, but all of those marriages took place after 1950 with her first in 1953. Lee would have been 16-17 years old in 1950. (Would American Horror Story really take on an Onassis?!?) 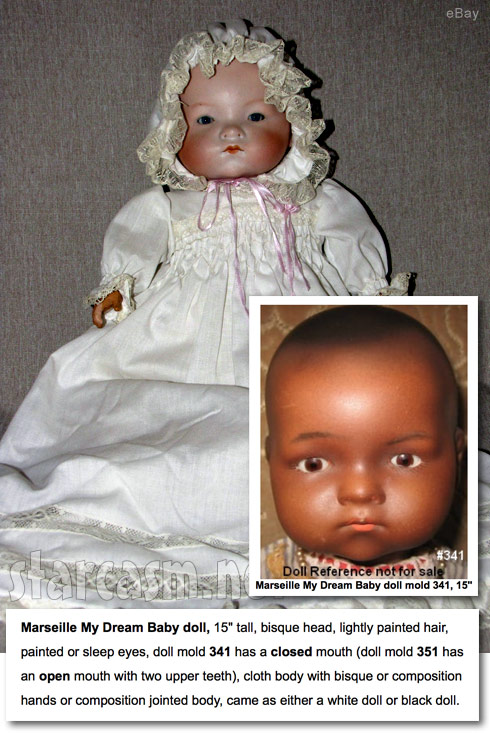 • The doll Spalding asks Delphine LaLaurie to retrieve for him is an 1895 Armand Marseille “My Dream Baby” (photos above). Armand Marseille was a German (DING! DING!) doll manufacturer who made doll heads from 1885 to the 1950s. Here’s a brief description from DollReference.com:

Armand Marseille of Sonneberg and Koppelsdorf, Thuringia, Germany was one of the worlds largest and best known bisque doll head manufacturers. The founder was born in 1856 in St. Petersburg, Russia the son of an architect and immigrated to Germany with his family after 1860. In 1884 he bought the toy factory of Mathias Lambert in Sonneberg and in 1885 acquired the porcelain factory of Liebermann & Wegescher in Koppelsdorf . . . and his empire in the doll world began.

From 1900-1930 it’s reported Marseille produced 1,000 bisque doll heads a day, they made bisque head baby, children, lady and character dolls, on cloth, kid or composition bodies, most with glass eyes, some with painted eyes, with the most commonly found doll molds of 370 (shoulder head on a cloth or kid body) and 390 (socket head on a composition body). Marseille interestingly did not produce the body of their dolls, but purchased those from other doll manufactures.

• Myrtle referenced the John Keats poem “Ode On A Grecian Urn” when talking with Zoe. Here’s the full poem with the excerpt recited by Myrtle in bold:

ODE ON A GRECIAN URN
By John Keats

Thou still unravished bride of quietness,
Thou foster child of silence and slow time,
Sylvan historian, who canst thus express
A flowery tale more sweetly than our rhyme:
What leaf-fringed legend haunts about thy shape
Of deities or mortals, or of both,
In Tempe or the dales of Arcady?
What men or gods are these? What maidens loath?
What mad pursuit? What struggle to escape?
What pipes and timbrels? What wild ecstasy?

Heard melodies are sweet, but those unheard
Are sweeter; therefore, ye soft pipes, play on;
Not to the sensual ear, but, more endeared,
Pipe to the spirit dities of no tone.
Fair youth, beneath the trees, thou canst not leave
Thy song, nor ever can those trees be bare;
Bold Lover, never, never canst thou kiss,
Though winning near the goal—yet, do not grieve;
She cannot fade, though thou hast not thy bliss
Forever wilt thou love, and she be fair!

Who are these coming to the sacrifice?
To what green altar, O mysterious priest,
Lead’st thou that heifer lowing at the skies,
And all her silken flanks with garlands dressed?
What little town by river or sea shore,
Or mountain-built with peaceful citadel,
Is emptied of this folk, this pious morn?
And, little town, thy streets for evermore
Will silent be; and not a soul to tell
Why thou art desolate, can e’er return.

O Attic shape! Fair attitude! with brede
Of marble men and maidens overwrought,
With forest branches and the trodden weed;
Thou, silent form, dost tease us out of thought
As doth eternity. Cold Pastoral!
When old age shall this generation waste,
Thou shalt remain, in midst of other woe
Than ours, a friend to man, to whom thou say’st,
“Beauty is truth, truth beauty”—that is all
Ye know on earth, and all ye need to know.

So… did I miss anything? Do the clues above reveal to anyone what AHS Season 4 is going to be about?!?