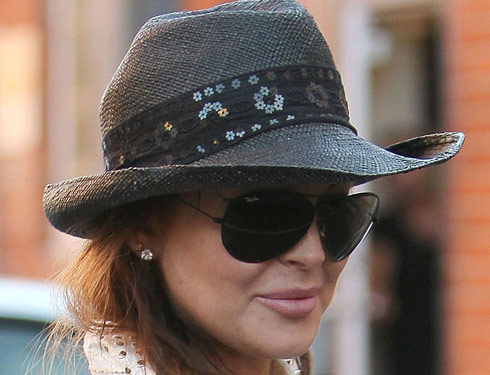 Lindsay Lohan and her Porsche were out apparently doing some damage again but this time it was on the east coast in the NYC. She was arrested early this morning for allegedly clipping a pedestrian with her car and fleeing the scene.

According to authorities, LiLo was parking said Porsche near the Dream Hotel in Manhattan when she nipped the knee of some 30ish dude shortly after midnight.

One of the passengers got out and checked the ride for damage, then Lohan and crew made their way inside the hotel. While she was inside the cops were called and she was arrested around 2:30 AM.

Lindsay was booked for a misdemeanor charge of leaving the scene of an accident and was issues a desk appearance ticket which means she didn’t have to come up with any bail to walk out.

The unidentified young man was hospitalized but sources tell TMZ there were no visible injuries and no alcohol was involved.

UPDATE: Lindsay is telling friends she was unaware until getting arrested that she had hit anyone. She also states that no one ever got out of the car to check for damages. In addition, she feels it’s probably a set up and that she’ll fight any possible future litigations that may stem from the incident.

The problem with her side of the story is credibility. With her past mistakes she’s now a target. Her claims could very well be true but it’s difficult to give her the benefit of the doubt.

Lindsay is on probation of course and any type of run in with the law is bad news. It’ll be up to the judge back in L.A. to determine if this situation calls for a request for Lindsay to return to court.

Recently LiLo was complaining about the vehicle travails of Amanda Bynes and how it seemed unfair that the Nickelodeon vet wasn’t getting the same harsh treatment that Lindsay received (seriously). Maybe Lohan was trying to prove she’s still the biggest hell on wheels from Hollywood.