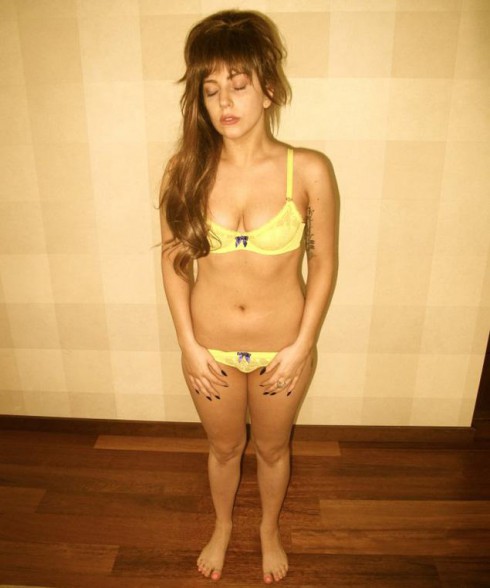 Lady Gaga has talked about eating disorders before, saying she suffered from bulimia as a teen, but now she’s owning up to the fact that it’s a continued struggle for her. I imagine being a Super Pop Star who traipses about in her underwear all the time would put body pressure on anyone.

Gaga’s recieved some flack this month for gaining a few pounds, and instead of quietly and secretly starving herself thin again, or signing a deal with a weight loss brand, Gaga owned up to indulging in her Italian dad’s pastas and pizzas in a radio interview. She said she was on a diet now, but that she wasn’t ashamed of having a little more meat on her bones.

Now on her social media website littlemonsters.com, she spoke out about her struggles with anorexia and bulimia in the captions of pics she posted of herself in her underwear. The newly brunette Gaga posed in a yellow bra and thong on a new “Body Revolution” section of the website with this caption:

Bulimia and anorexia since I was 15. But today I join the BODY REVOLUTION To Inspire Bravery and BREED some m$therf*cking COMPASSION.

This section of her site is truly inspiring. Just scrolling through the photos and stories “little monsters” put up will bring a tear (or several) to your eye, and make you feel better about yourself in the process. People are sharing stories of pain and triumph, showing off prosthetic legs and cancer scars, and finding beauty in perceived imperfection. Sometimes it seeems like the images we are bombarded with all day are only those of (usually highly photoshopped) perfection, which lead us to feel bad about our own bodies. The “Body Revolution” section of Lady Gaga’s website is the anecdote to that.