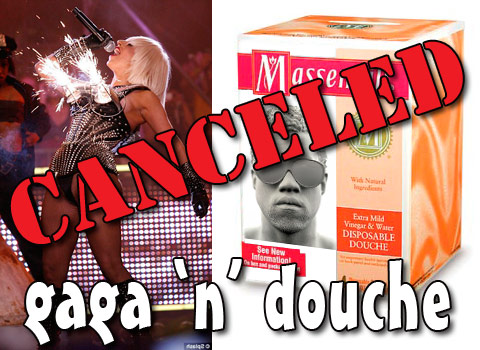 That was quick! It seems like I was just writing up my post with all the details of where and when to get your tickets and all of a sudden it ain’t happenin’ no more!

No official reason has been given for the cancellation.

Refunds are available at the point of purchase. Tickets purchased online and via phone will be refunded automatically.

As I mentioned in my previous post, I’m not necessarily a huge fan of Gaga or Kanye’s music, and I’m certainly not a big fan of Kanye West as a human being, but I bet this tour would have been quite a show! Maybe it’s better for Lady Gaga, though, If she had paired up with Kanye then she would have surpassed Kirstie Allie as the woman with the world’s largest ass.

I’m sure there will soon be a statement with some “conflict of schedule” or some other innocuous excuse for the cancellation, but it’s almost certainly stemming from the fallout from Kanye’s douchebag maneuver with Taylor Swift at the 2009 VMAs.

UPDATE 10/17/09 – Lady Gaga has announced new tour dates, sans Kanye! It will be called The Monster Ball Tour starring Lady Gaga and you can see all the dates that have been announced HERE.
Be our BFFs on Twitter, Facebook!, and Google +