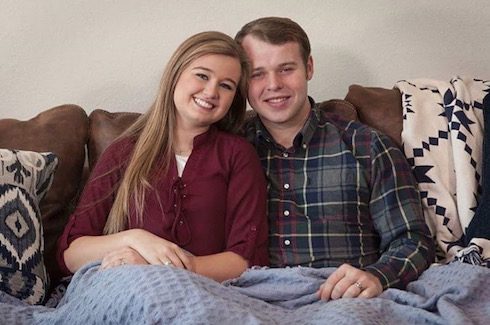 Kendra and Joseph Duggar, the third of three concurrent Duggar family couples to be pregnant, recently announced they’re having a boy by blowing up a bomb of blue-colored smoke in the Arkansas hills. According to a report from Us Weekly, the pair trudged out into the backcountry with the rest of the Duggars for the big reveal, which was in fact supervised by a weapons expert. From Us’ article:

Joseph’s brother, John David Duggar, who is an Arkansas constable and part-time officer with the Tontitown Police Department, organized a truly original gender reveal using tannerite mixed with blue-colored powder to reveal the gender of their child once the explosive denotated. The Duggar family stood about 20 yards behind John David — who has undergone extensive gun safety and firearms training — as he shot a bullet 200 yards into the substance commonly used in target practice.

I’ve always thought that a cake with gender-specific M&Ms inside of it was a pretty tacky (if delicious) way to tell the world whether you’re having a boy or a girl. So Kendra and Joseph Duggar’s preferred method seems a touch dramatic for me. But you can judge for yourself — Kendra and Joseph have since deleted their post, but TLC kept the moment alive:

Kendra and Joseph also took to the Duggar family website to describe what having a boy means to them:

Wow! We are so happy to learn that our firstborn is a boy! Our minds are already racing toward all the future memories to be made with this little guy! Most of all, we are already asking God to bless him and help us grow him into a loving and faithful follower of Christ!

Joseph, 22, and Kendra, 19, shared the news of her pregnancy on December 18th. The two of them were married last September; the relative quiet that followed, capped off by what most observers agreed was the most boring honeymoon in Duggar history, led to immediate speculation that Kendra was pregnant. (For what it’s worth, the two still haven’t said anything about Kendra’s due date. If she did get pregnant right after an early September, she would likely give birth sometime in early June of 2018.)