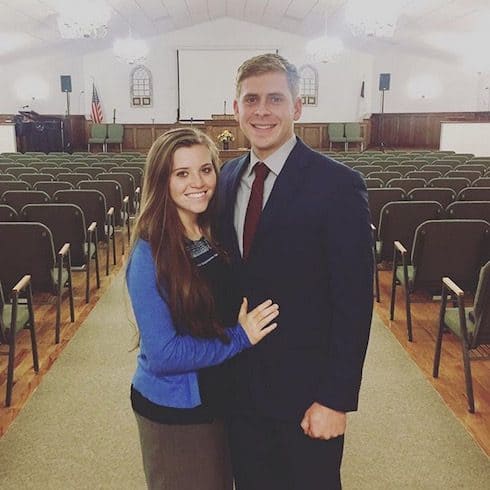 The Duggar family’s association with a pastor known for espousing child abuse has them embroiled in a growing controversy just ahead of the Counting On season premiere. A growing number of Duggar fans has begun speaking out against the family connection to Michael Pearl — and to the Duggars’ own history using violence as a means to discipline their children.

What it boils down to is that Joy-Anna Duggar is married to Austin Forsyth, and Austin Forsyth’s family owns the Fort Rock Family Camp and Retreat Center down in Combs AR. Fort Rock, a fundamentalist hot spot and a Duggar stomping ground for years, is scheduled to host speeches and seminars by Michael and Debi Pearl twice in 2018: once from June 7-10, and again from October 4-7. (The June event is sold out, but tickets for the October Family Camp are still available; they start at $300.)

These particular events are proving controversial because Michael Pearl has a history of espousing child abuse as a parenting practice. He’s best known for his 1994 book To Train Up A Child (which boasts the unintentionally shortsighted descriptor Training For The 21st Century). The book encourages parents to use switches on their children starting at six months; to keep a quarter-inch flexible plumbing line in the back pocket for out-of-the-house discipline; and to train kids the way one might a dog or a soldier.

For example, here’s an excerpt from the book’s “TENNN–HUTT!!” section, via Amazon Kindle preview:

As in the military, all maneuvers in the home should begin with a call to attention. Three-fourths of home discipline problems would be solved if you could instantly gain your children’s silent, unmoving attention. “TO THE REAR — MARCH” translated into family language would be: “Leave the room,” or “Go to bed.” Without question they would turn and go. This is normal in the well-trained family. And that degree of order and obedience brings peace and security to the children thus trained. I am not suggesting a militarized atmosphere, just a comparable level of respectful compliance.

And here’s a short video clip of Michael Pearl preaching at his Church at Cane Creek. Pearl starts talking at the 1:40 mark:

To Train Up A Child was also, as the New York Times noted in a 2011 article, found in the homes of three different children who had died by their parents’ hands. Pearl told the Times he couldn’t be held responsible for the three childrens’ deaths, likening their connection with his book to a death by alcohol poisoning with a 12-step program guide nearby.

According to several reports on the latest Duggar controversy, enough fans of the family are concerned enough by the Forsyths’ and Duggars’ association with Michael Pearl that they’ve petitioned Fort Rock to cancel Pearl’s appearances.

But Terry Forsyth, Austin’s father, has thus far disagreed. “We do not believe everything the Pearls believe but have enough discernment to throw out the bones if you know what I mean,” he said, in a letter that’s since gone public on a Duggar fan page. “Mr. Pearl is a world-class knife/tomahawk thrower[;] as you can see by the theme of our camp that fits right in.”

Fans have also begun reexamining the Duggars’ own approach to corporal punishment. The 2015 publication of a then-nine-year-old police report detailing Josh Duggar’s molestation of his sisters also described the “rod” that Jim Bob and Michelle used to spank their children.

And Michelle Duggar has also used the word “training” to describe she and her husband’s approach to parenting — which is telling, since “training” and “blanket training” in particular are the terminology and methodology described by Michael Pearl in To Train Up A Child.v

For now, TLC is keeping silent on the matter. The network recently announced that the new season of Counting On, the Duggar family show that rose from the ashes of their last child abuse controversy, will return with new episodes on February 26.

Josh Duggar scandal whistleblower comes forward: ‘I’m not at all sorry that I did it’